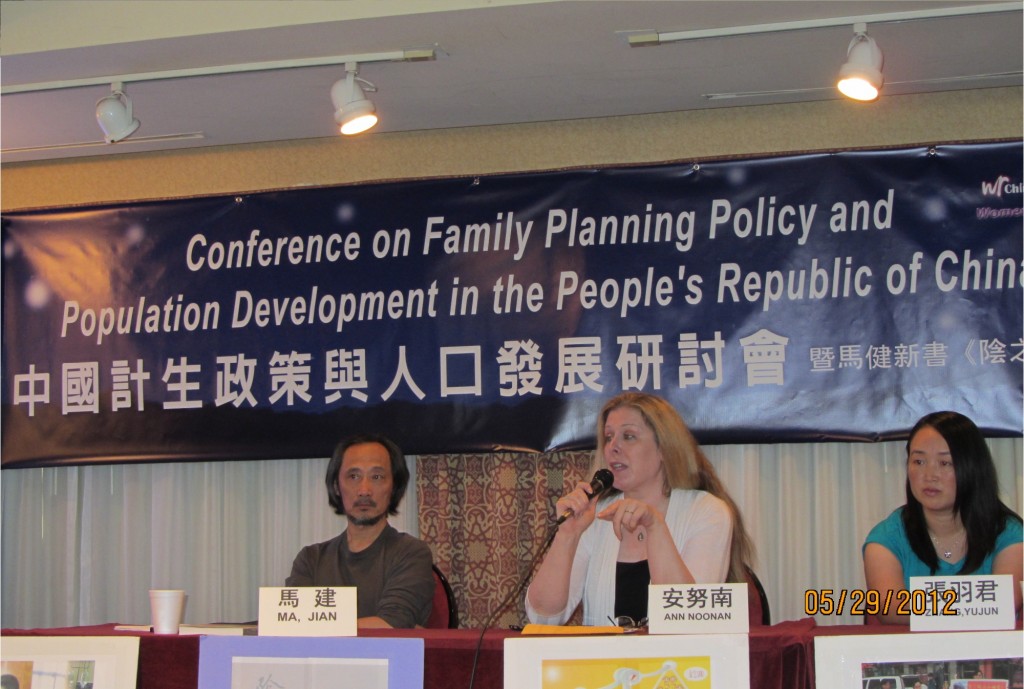 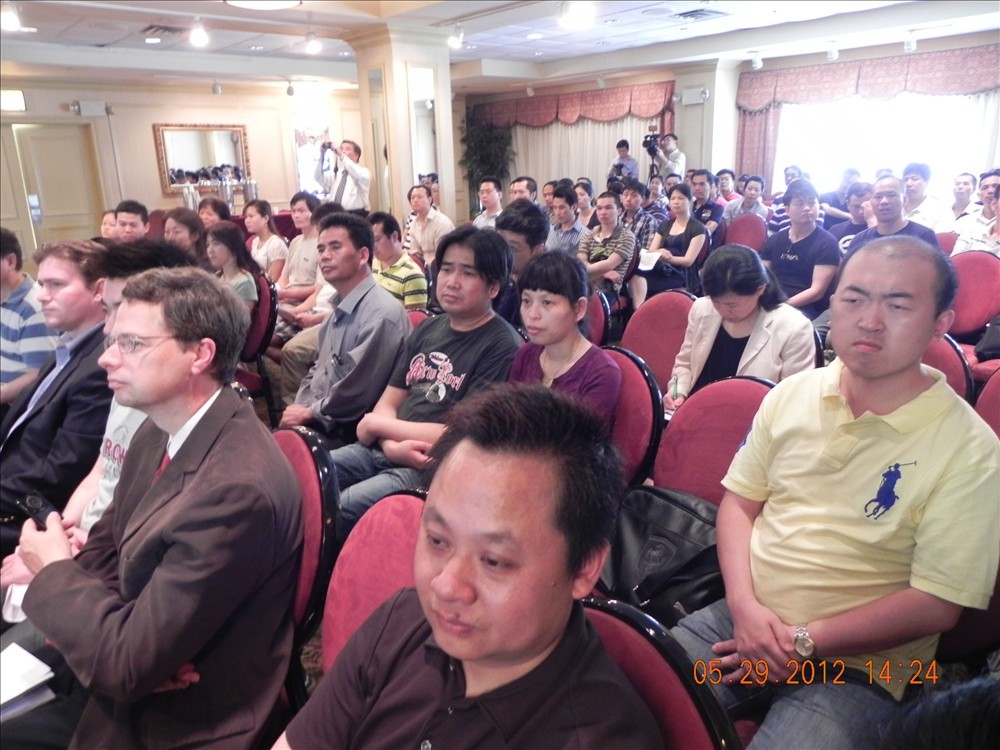 Family Planning has been the national policy of China for more than 30 years. What are the reasons for this policy? What are its effects on Chinese society? Should the policy continue to be implemented? On May 29th, 2012, Women’s Rights in China held the Conference on Family Planning Policy and Population Development in New York, USA. WRIC invited experts and scholars to discuss the Family Planning Policy’s impact on society, family and individuals in China and problems currently facing population development in China.
A group of scholars participated in a morning round table discussion session, including Tibetan history researcher, woman’s writer Li Jianglin, theorist Hu Ping, WRIC founder Zhang Jing and One Child Policy victim Han Wu. A BBC interview of Ma Jian, author of Yi Zhi Dao, was also broadcast. In the afternoon, Ma Jian, Ann Noonan, Zhang Yujun gave talks. Chinese population policy experts Yang Zhizhu and He Yafu, both of whom were unable to attend, submitted papers that were read by others. More than 120 New York residents attended the event, including Wang Xuezhen, who shared her experience of 11 attempts at meeting Chen Guangcheng during his house arrest.
Professor Yang Zhizhu, formerly Associate Professor of Law at Chinese Youth Political Institute, was fired in 2010 for having an extra-quota child. The birth of his second daughter and its aftermath initiated fierce debate in Chinese society. The event catalyzed the most closely watched public debate the One Child Policy’s thirty year history. Prof. Yang had long commented on China’s Population and Family Control policies. His articles have appeared in Chinese publications such as Southern Weekly, New Kuabao, Eastern Morning Daily, New Beijing, Modern Express, etc. He was a leading activist and dissident against the One Child Policy.
Professor Yang’s report, The Situation of Chinese Women Under The Birth Control Policy, stated, “From fear of persecution of the One Child Policy and forced abortions, many women had no choice but to hide or leave their homes. Ultimately these women gave birth taking considerable risks outside of registered hospitals. This situation resulted in the death rate from birth among mobile population to exceed pregnant women in rural areas. Women giving extra-quota births, which accounted for 6% of the total population of pregnant women, accounted for 50% of deaths.”
He Yafu was a former reporter for Coastal News, founder of Babi Translation Agency. Mr. He had published hundreds of articles on Population and Family Planning Policy on the internet. The web visitor count of his microblog had reached over ten million, leading all other microblogs focusing on the One Child Policy. He also published articles in Eastern Morning Daily, First Financial Daily and China Youth Daily, etc. Mr. He was an accomplished commentator on Population Development and Family Planning Policy in China.
Mr. He’s paper, Why The One Child Policy Should Be Abolished, stated that “Over population in China” was a myth. Of the more than 200 countries worldwide, almost none practiced forced birth control outside of Mainland China. Whether a country was overpopulated depended not on the total number of people, but more importantly its population density. Many countries had higher population density than China, for example, South Korea at 487 persons per square kilometer and Japan at 337. In contrast, China’s population density was at 140 persons per square kilometer. Even taking out inhospitable parts of western China, its population density would still be far below Japan and South Korea. Governments in Japan and South Korea not only did not practice the Family Control Policy but actively encourage reproduction.
Mr. He pointed out that to enforce draconian population control policies would require sufficient rationale. Forced reproductive restrictions infringed upon the basic human rights of citizens. He proposed a test of three criteria: One, would fewer population lead to quicker prosperity? Two, was the Family Planning Policy the only vehicle to control population growth? Three, human rights. The Family Planning Policy could not pass even the first, practical test let alone the latter two. There were no solid reasons to enforce it.
Ms. Ann Noonan was the director of the Committee for U.S. International Broadcasting. Ms, Noonan said that reproduction was a basic human right. The One Child Policy was a severe abuse of human rights. It was one of the most egregious and violent persecutions of women in the world today. Ms. Noonan said that women and their families in China who are victims of human rights abuses need Voice of America (VOA) radio and Radio Free Asia (RFA) broadcasts. She reminded victims of the policy that the American people would not sit idle while millions of innocent victims shed their blood.
WRIC member Zhang Yujun gave a presentation of reports on a widespread yet largely unpublicized child brides in Putian, Fujian. WRIC volunteer Yao Cheng had been investigating and reuniting child brides with their families since 2009.
Mr. Ma Jian gave the last presentation. Ma Jian was a famous Sino-British writer whose novel Beijing Coma received the 2009 British International Free Speech Award, 2009 Athens Literature Award and nominated for Berlin Literature Award. Beijing Coma has been published in more than 30 languages around the world. Mr. Ma was listed as one of fifty most important modern writers by French magazine Lire in 2004. Mr. Ma’s newest work, Yin Zhi Dao was the result of seven years’ labor. It combined large numbers of in-the-field interviews and countless factual cases to tell the complete story of the One Child Policy.

Mr. Ma emphasized that one book could not stop the One Child Policy. However, it was the duty of a writer to express respect for life, especially the life of a child who had yet to taste a breath of air. The Chinese government regularly executed millions of innocent babies in the womb every year. The warmth body of a loving mother became all too frequently the execution ground for babies. Since 2008, Family

Planning Policy passed from the responsibility of the propaganda departments to “secret agencies” headed by Party Committee chairmen at all levels, whose actions were hidden from reporters, making Mr. Ma’s investigation much more difficult. 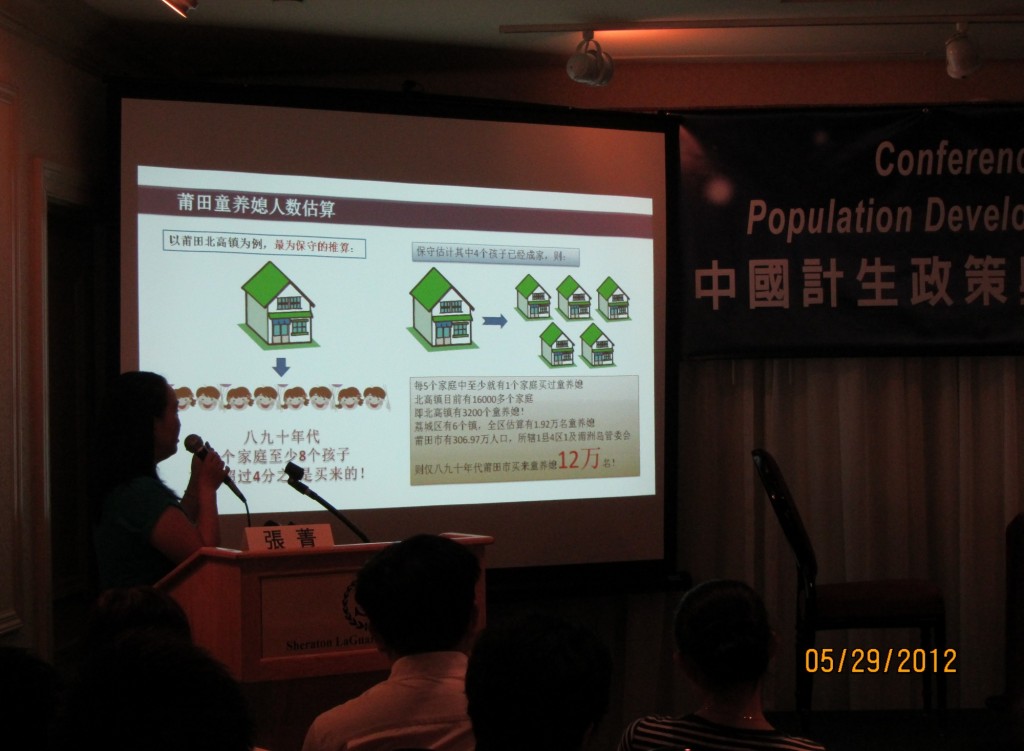 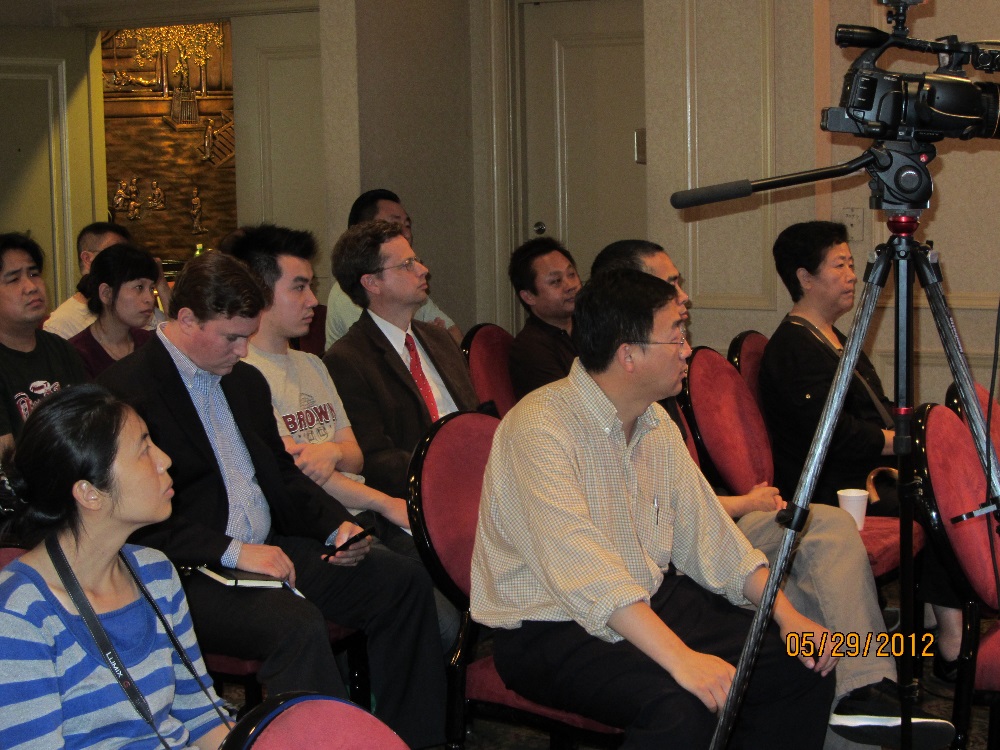 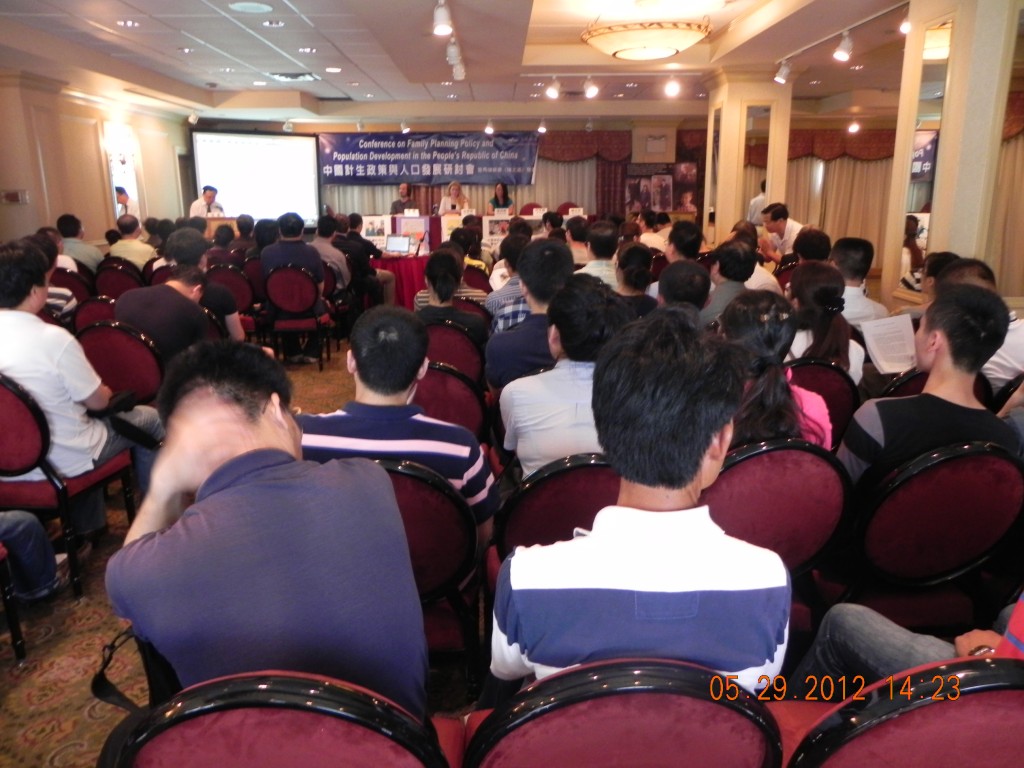 More than one hundred of people attended the WRIC conference