An Investigation on China Village’s One Child Policy “Three Examinations”

Summary: In rural villages, the Chinese government’s One Child policy is enforced with the ¨Three Examinations,〃 which check women for use of contraceptive rings, pregnancy, and illness practice that is hostile and abhorrent to women. 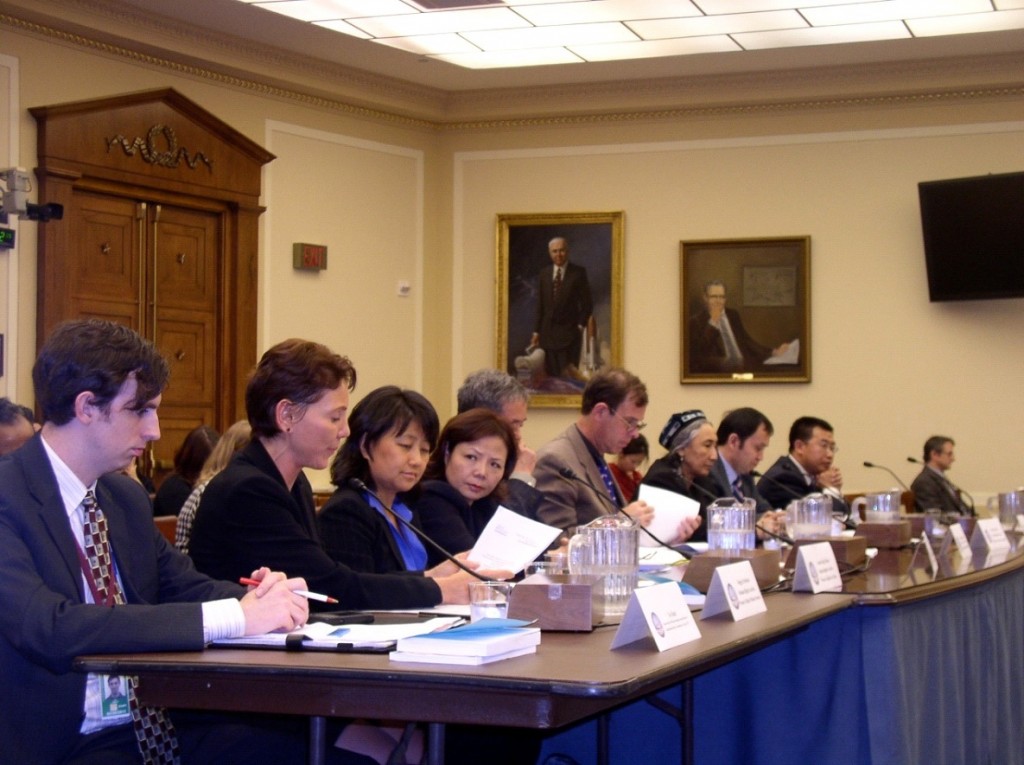 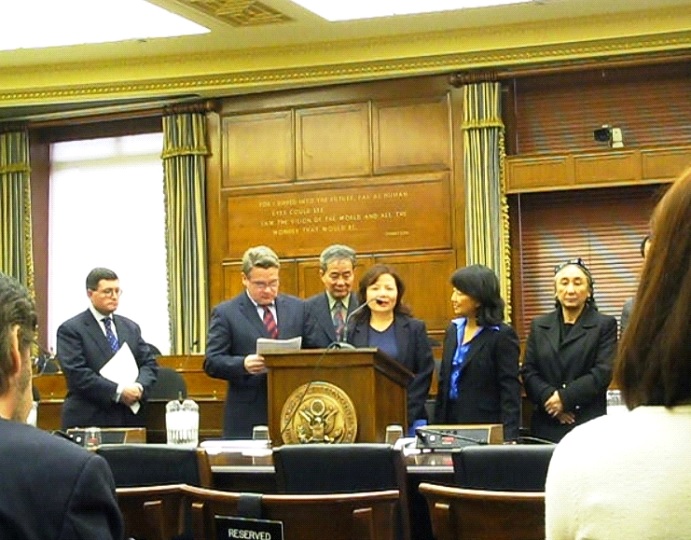 Jing Zhang giving a speech before testifying for the hearing

From September 2008 to March 2009, we visited the provinces of Shandong, Guangdong, Guangxi, Sichuan, and He Bei to investigate the conditions of rural villagers with regard to the One Child Policy. During this time, the focal points of our investigations were the so-called ¨Three Examinations,〃 which check women for use of contraceptive rings, pregnancy, and illness four times each year.

The Head of the One Child Policy Commission, Zhao Bai Ge, said: ¨There exist 240 million women of childbearing age inChina now, and among them, 83 percent use birth control and contraception.〃 There is some truth in those words. For example, during a trip to a village in Hebei, we found that among the 288 women in that village, 279 women of childbearing age wore the contraception ring (about 92 percent). Only those who have womb defects did not use the intrauterine device.

But Zhao Bai Ge, a Cambridge graduate, has also said: ¨Chinaˇs One Child Policy is not as controlling as it seems. The people are voluntarily choosing to enforce the policy.〃 That is a complete lie.

Not only do enforcers of the policy disrespect womenthey have no regard for the ethic of preserving personal privacy.
According to a 17-year enforcer of the One Child Policy, as well as several women who have undergone the Three Examinations, the procedure is as follows:
1. The woman is stripped naked for an external physical examination. Her abdomen is pressed to determine if there is any pregnancy, and her breasts are kneaded and squeezed to see if breast milk comes out. Often there are mothers who have no more breast milk.

2. The uterus is checked for the presence of a contraceptive ring.

3. Using a vaginal mirror, the appearance of the vagina is examined. (This part of the procedure is often omitted in poor villages since each vaginal mirror costs 5 RMB). If the vaginal folds appear to be new, this is taken as evidence of either a recent birth or miscarriage. In the case of a miscarriage, proper proof must be provided. If it was a birth, an investigation is launched on the legality of the birth under the terms of the One Child Policy.

While interviewing the One Child Policy supervisor in a SiChuan village, we consulted a book titled “One Child Policy Contract and Protocol”. It clearly indicates that if villagers do not make their appointed date for the Three Examinations, they will be fined 10 RMB a day. We have spoken with many mothers; not one of them wants to go to a gynecological clinic four times a year for a uterine checkup.

Furthermore, women are forced to carry an introduction letter written by their villageˇs One Child Policy supervisor whenever they travel. Those who travel to foreign lands must first report to a local One Child Policy supervisor for the three examinations, and then mail the results back to their own villages. If the village commission office does not receive the test results, a large fine will be imposed upon the family of the woman.

One can imagine the limitations that the quarterly examinations impose on women; their life-giving capacities, travel, and even them most intimate relationship between husband and wife are all controlled by the government. It can be said that until Chinaˇs women reach menopause, they are confined like sows by the fence of forced birth control, controlled and monitored by the government with the sole purpose of not allowing them to have children.

Truthfully, mothers are given no respect in China; their wombs are the property of the Communist regime, raised like livestock with their every use subject to approval. Mothers are required to keep a record of their uterine activities, including the date they put their rings in and the type of ring used, when their periods come each month and duration of their period, and the date on which their child was conceived. To the Communist Party, every mother is a suspected criminal and the three examinations are ways to stop the mother from committing the crimeit is a precaution against future motherhood.

In a way, enforced wearing of the contraceptive ring is like putting shackles on womenor rather, like putting tracking devices on them so that they may be watched and monitored like animals. Women cannot be touched and their men cannot display any interest. The ring guards the motherˇs uterus, representing the nationˇs power, and, as decided by the law, the ring is the nationˇs defender of that power. It lies deep within the womanˇs vagina, not only killing the husbandˇs sperm but also providing the One Child Policy workers with a key to that ring.

If someone dares defy the law and removes the ring, it becomes proof of a crime as severe as murder. The perpetrator will be punished immediately. We interviewed women living on boats on the Guang Dong (Guang Xi River), the majority of whom have removed their rings. They have become escaped criminals ever since, living in constant fear of being caught and punished. Imagine a baby who has to hide inside its motherˇs womb for nine months before it can secretly be born into a society far more dangerous than the womb, then watch its mother face cruel punishment, jail time and heavy fines. And when this child grows up, he or she will have to live under the restrictions of the One Child Policy as well, and will be forced to live a life of fear and unfairness.

We visited small towns in the Bo Bi Xian County: Shuang Wang and Sha Po.
To protest the imposition of the three examinations on women in Bo Bai Xian County (in particular the fines and penalties for children that exceed the One Child Policy limit), the people there organized the largest uprising since theTiananmen Square demonstrations. More than 50,000 people from the county surrounded and destroyed six government office buildings in the villages and smashed the concrete roads in order to obstruct police cars. There were at least seven deaths, including two police officers who were beaten to death by the rebellious masses and five student demonstrators who were trampled to death. More than 200 people and 100 students were captured and jailed.

What is more, the incident exposed the corruption of the local government, which had used the policy penalties as their own income. Prior to the rebellion, the countyˇs official Website stated that ¨the entire county has provided more than 5,800 men to the labor force, produced more than 200 cars, tied the tubes for the countyˇs 17,000 women, performed abortions and installed contraceptive rings, and imposed [One Child] policy fines that reach up to 7.88 million RMB.〃

In order to investigate the factors leading up to the rebellion, we questioned local barbers, photographers, cab drivers, street peddlers, restaurant workers and hotel personnel, etc., and found that there were a few main points. The factors that these people resented most greatly were the corruption of policy personnel, the fact that the government uses One Child Policy penalties to accumulate wealth, and the unfairness of suddenly enforcing policy rules very strictly after 10 years of leniency.

This last point is one that peasants and farmers repeatedly complain about most bitterly. Previously the One Child policy was not enforced very strictly in Bo Bai County; families with two, three and even up to five children were not uncommon. In those days offending parents could pay off policy personnel with a few hundred RMB. Now, those who exceed the policy limit are forced to pay a finebut now that their ¨illegal〃 sons and daughters are already grown up and attending junior high school, the parents refuse to pay more money. To deal with the villagersˇ refusal to pay up, policy enforcers organize third-class county cadres and policemen into a large military unit, marching into towns and letting no family escape from investigations of policy offenses. They imposed 1000 RMB fines on women who do not make their Three Examination appointment and had the courts of law enforce that payment. They also used an extreme course of action, the ¨One Ring, Two Tie〃 procedure, in which they force (by binding) a woman to go to the hospital, where a ring is inserted and, in addition, a tubal ligation is performed (a surgical procedure in which the fallopian tubes are cut, clamped, blocked, or tied to prevent the womanˇs eggs from reaching her uterus; the sperm is also blocked from traveling along the tube to meet the egg).

Ever since March 1, 2007, a One Child Policy leadership group established by Bobai Countyˇs policy personnel has raided the houses of extremely poor families and villages, tearing down the meager establishments and destroying possessions. Peasants began to hide in the mountains and along the lake shores. More than 250 mothers were captured and arrested at a reservoir near the town of Jiangning and taken to a hospital. There pregnant women were given an abortion shot, women who were not pregnant yet had a contraceptive ring inserted, and those with two or more children had their fallopian tubes cut off surgically.

In the small town of Yingqiao, male villagers and middle school students found this to be the last straw. They rushed into the homes of One Child Policy personnel and smashed their belongings. Afterwards they escaped to the mountains, but were eventually surrounded by more than 300 police officers, and 13 of the villagers were arrested and sent to prison. Especially in the town of Shuangwang near Guangdong, many female villagers who were familiar with the area escaped to Pubei County and Lianjiang City in Guangdong, where they were chased by potential captors sent from Bobai County. The husbands and elderly relatives who were unable to escape with the women were taken hostage by policy personnel, and even larger fines were imposed upon them.

The uprising in Bobai County was defeated, and the rebellious villagers were forced to pay a heavy price: Some older mothers agreed to have their tubes tied in order to beg the government to release their sons from imprisonment, and some women were even forced to undergo tubal ligation three times. Many people were stripped of their homes. Policy personnel took away valuables like electric appliances, farming tools, iron framed beds, aluminum window panes, pigs, chickens, cows, and sheep, while goods of little value such as pots, pans and teapots were all smashed. Many villagers took their sons and daughters to spend the nights in the mountain forests, where many became very ill. Countless families were broken up. Like the aftermath of theTiananmen Square incident, rebellion was once again resurrected in the villages.

The Chinese government has used inhumane methods to implement its One Child Policy. It defies human rights. It is uncivilized and barbarous. This sort of behavior must be condemned by humanity because every human being is born of a mother. Mothers should not be disgraced and humiliated by any government as they are by the Chinese government.

These are the findings of our extensive investigation into the Three Examinations. The department charged with enforcing the One Child Policy is gradually becoming more secretive, especially after the central authorities sent down orders to keep all work confidential. All the people that we interviewed and any exact locations have been concealed for the sake of their safety, which the reader will surely understand.