Welcome to Subtle Asian Traits, the meme group that became a global phenomenon

It started with an overheard conversation. “Saw it on Subtle Asian Traits,” someone next to me on the subway said to her friend. A few days later, I was mindlessly watching Instagram Stories when I saw a Pikachu meme posted by a girl I knew from elementary school. She wrote, “lmao I’m addicted to subtle asian traits.”

Later that same day, one of my former coworkers invited me to join a Facebook group so she could tag me in a meme. The name of the group was Subtle Asian Traits. 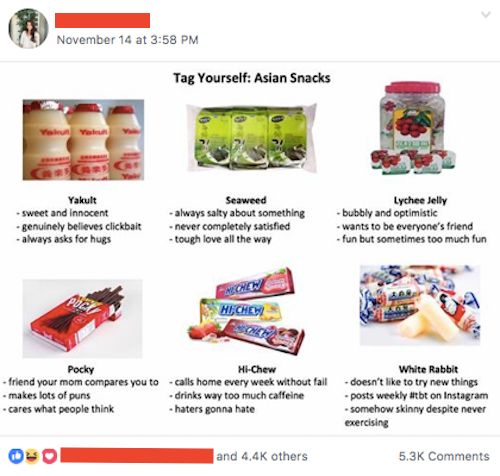 Subtle Asian Traits, on the other hand, currently boasts almost a million members. They hail from all over the world, including the United States, Canada, Australia, Europe, and Asia.

Remarkably, this all happened in a very short period of time. According to Ai-Ling Khoo, one of the moderators of Subtle Asian Traits, the Facebook group officially launched on September 16, 2018.

Khoo explained that the group was started by nine Asian-Australian friends who met each other in Chinese school. It was initially intended as a way for them to share relatable memes with each other and their Asian friends. 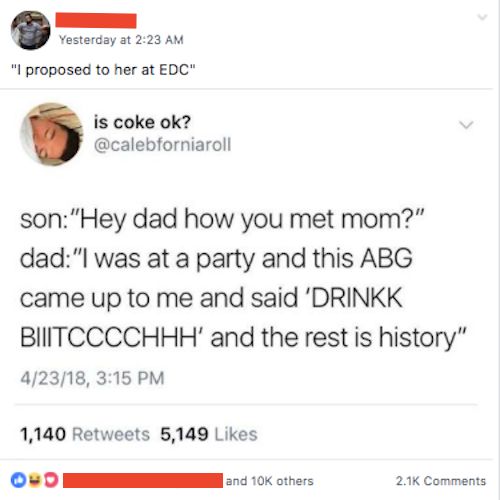 But Subtle Asian Traits soon exploded into something far larger — something that even the founders didn’t anticipate. At the time that I joined in mid-October, there were around 70,000 members. And over the course of just a few short weeks, the Facebook group has exploded to accommodate over 900,000 members.

How did it happen? And why, out of all the Facebook meme groups out there, did this one blow up into a global phenomenon?

‘I thought I was the only one…until now’ 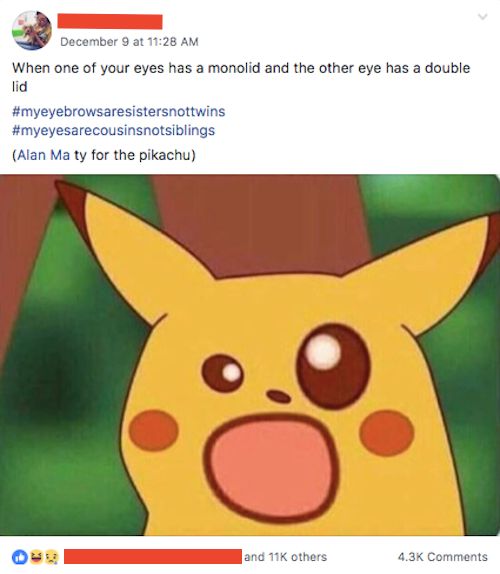 Growing up Asian in a Western country like the United States, it can be hard to see yourself represented in movies and TV shows. Studies have found that over 60 percent of TV shows have no Asian series regulars, and when they are depicted, they are often marginalized or tokenized on screen. Hollywood is no better, and it continues to whitewash movies by casting white actors to play Asian roles.

The net effect is that Asian people are rendered invisible, their stories untold and their experiences erased. And for many Asian people growing up in the United States, this is something they’ve simply become accustomed to.

“I watch so much TV, but most of the time I can’t relate to them at all,” Irene Kim, a 23-year-old Subtle Asian Traits member from New Jersey, told babe.

Subtle Asian Traits, therefore, was the first time many Asian people saw things they could actually relate to. Kim said that she’s finally able to see representations of her life and her experiences on the meme page.

She mentioned one meme in particular that referenced Korean skincare routines. “This is all the crazy stuff my mom does,” she said. “But I really thought that was just my family. I thought I was the only one…until now.”

From observations about physical appearance (“Who else here is cursed with eczema?” one person asked) to jokes about strict parents and their high expectations, most of the memes on Subtle Asian Traits revolve around shared experiences. And as thousands of people leave comments saying “same” or “me too,” what emerges is a sense of solidarity and vindication.

For example, the question about eczema received 6,000 likes and over 2,000 comments. The original poster later added this edit: “I take comfort in knowing that you guys have shit genes too.” 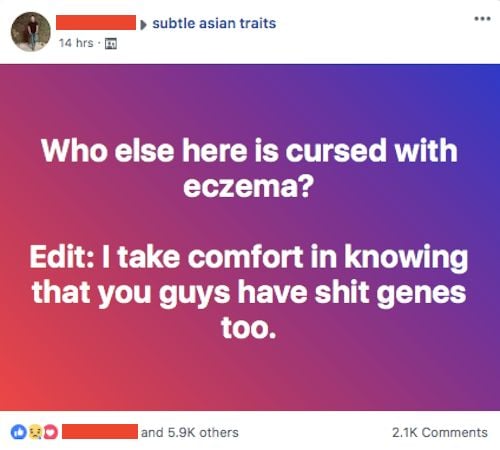 “We’ve never seen a group like this before,” Daniel Anderson, a 22-year-old Subtle Asian Traits member from Seattle said. “We can come together and use this place to laugh together and relate to each other.”

Especially for Asian people who grew up in predominantly white neighborhoods, Subtle Asian Traits is a space where they finally find others who can relate to them.

“Growing up, I was embarrassed about so many things,” Kim said. As an example, she told us a story from her childhood where a white friend made a passing comment about how her house “smells weird” sometimes.

“I’m almost mad at myself for ever thinking that the way my family lived wasn’t normal,” Kim said. “Now I’m seeing all of these memes from other people about things like bringing Korean food to school and going to SAT class on the weekends and I’m like, oh! I wasn’t the only one.”

‘For the first time, we’re not the butt of the joke’ 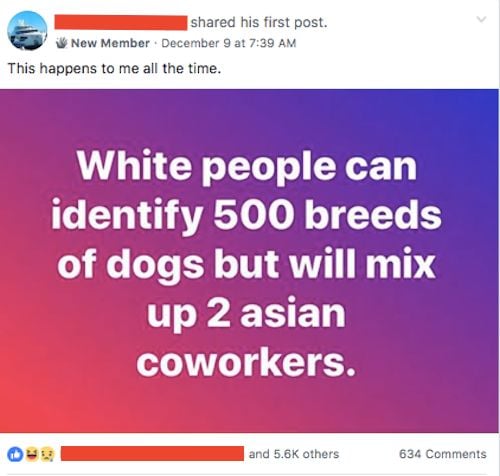 Racism is a near-ubiquitous experience for Asian people. Everyone I spoke to could point to at least one specific incident of racism — such as a racial slur or a “Go back to where you came from!”

Most of the time, however, racism doesn’t manifest itself that overtly. “I haven’t ever had to fear for my own or my family’s well-being,” Jessica Zhou, a 20-year-old Subtle Asian Traits member from Torrance, California said. “But I think a lot of my friends and I have stories of being side-eyed during school lunch because of the food that their parents packed, being mocked with pulled eyes or pseudo-Chinese.”

In fact, these experiences with micro-aggressions often make it difficult for Asian people to fully enjoy humor. “When it comes to Asian-related humor, you’re used to being the butt of the joke,” Kim said.

Subtle Asian Traits, therefore, is a space where Asian people can finally escape these racial stereotypes and engage in humor that isn’t demeaning. “This is an Asian community safe space,” Anderson explained.

Some people, however, have criticized the group for reinforcing racial stereotypes. For example, memes that make fun of high-achieving Asian parents could be seen as perpetuating the stereotype that Asian people are ruthlessly ambitious.

However, most of the people I spoke to did not think that the memes were playing into racist tropes. If anything, they felt that they subverted stereotypes. “We are illustrating to people that these stereotypes don’t necessarily define us,” Khoo said.

But even for the stereotypes that do ring true, they don’t carry the sting of a racism simply because they’re being spoken about in a community that predominantly consists of Asian people. 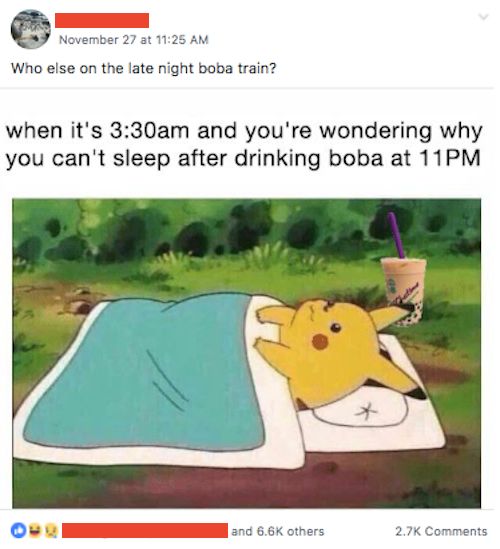 “Most of these stereotypes have a grain of truth in there,” Kim told us. “But we’ve never had ownership of them before.”

Kim explained that if a non-Asian person makes a joke about Asian people being hyper-competitive, it’s degrading because it doesn’t come from a place of shared experience and mutual understanding.

“But when we joke about it with each other, it comes from a place of understanding,” she explained. “There’s no shame in laughing about how our parents stored all the plastic bags, or how we chug bubble tea. Like, we all experienced it. And we’re taking ownership of it.”

‘A space where you can just feel like yourself’

While the group mostly consists of friends roasting each other and people thirsting over Instagram models with six-pack abs, Subtle Asian Dating also serves an important role as a safe space. After all, many sexual stereotypes pervade the Asian community and Asian women are often fetishizedwhile Asian men are often emasculated. 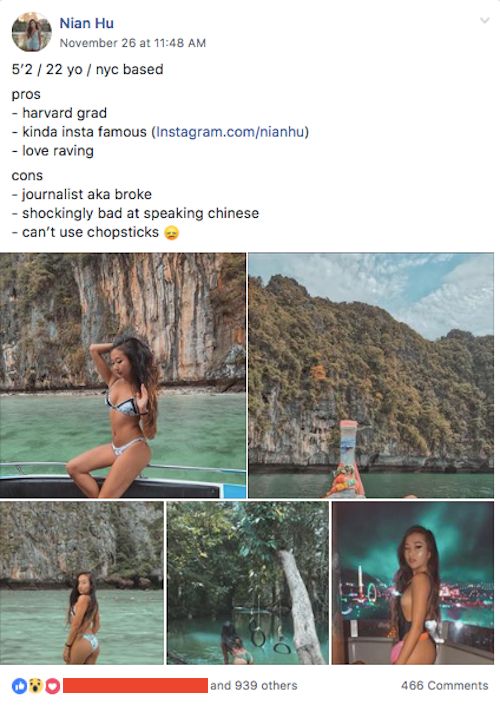 Out of curiosity, I posted about myself on Subtle Asian Dating. My experience was similar to what Kim described. I received over 400 comments, but none of them were racist or fetishizing. In fact, most were respectful and kind. This stands in stark contrast to most of my experiences on apps like Tinder and Bumble, where I’ve grown accustomed to remarks like “You’re pretty for an Asian girl” or “Is it true that Asian girls are tight?”

“This is definitely something that people have been looking for,” he said. “It’s an alternative to more traditional places like Tinder. As we all know, we can run into problems with that — creepy people, yellow fever people, all that.”

‘No matter where we are in this world, we never fully belong’

For Asian people growing up in Western countries, it can be extremely difficult reconciling two identities, especially when they so often come in conflict with each other.

Matt Liu, a 28-year-old Subtle Asian Traits member from Houston, described it as “trying to cling to two different trains moving in opposite directions.”

“Our identity is based on a state of duality,” Liu explained. “Being an American that never gets taken as American, and being Chinese but barely understanding the language and not being able to pass for Chinese either.” 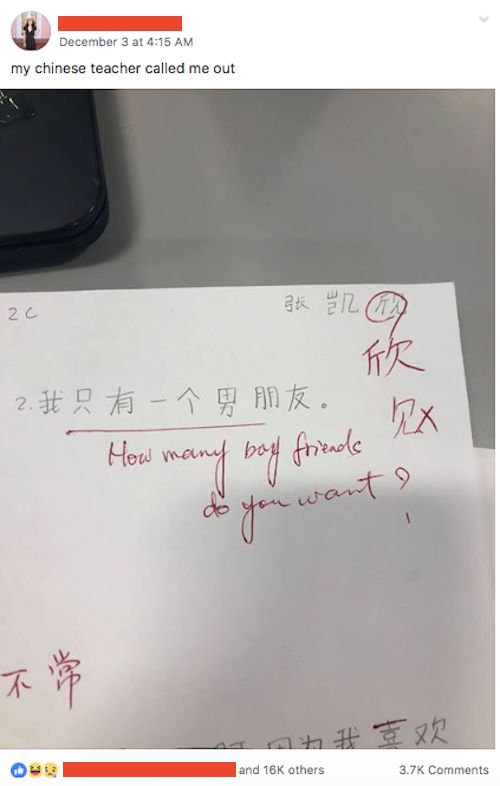 In fact, many of the people I spoke with echoed this feeling of never quite fitting in anywhere. “We go to school in a Westernized world where we feel like one person, and then we go home to our Asian culture and feel like another,” Khoo said. “It’s almost like if you are two people but not truly a full member of either culture.”

“No matter where we are in this world, we never fully belong,” Kim said.

On Subtle Asian Traits, people are attempting to write this narrative and bridge the gap between the two cultures through the medium of memes. For example, Zhou pointed to the “chi fan le/qi chuang le” seagull memes that make fun of the way Chinese parents would yell at their children to come out of their room.

“I grew up learning and speaking Chinese almost exclusively with adults, usually family members, and was so self-conscious about speaking it or referencing it to anyone else, let alone people my age,” Zhou told us. Seeing her native tongue, once exclusively reserved for her Asian family, used in memes among her Asian-American peers has been nothing short of transformative.

“Semi-jokingly now, I call someone I’m seeing ‘bao bao’ and we had a conversation about terms of endearment in Chinese,” she said.

And in a way, it is this very sense of perpetual non-belonging that brings everyone together in Subtle Asian Traits. No matter where we grew up, or what country our parents are from, we were all raised in a way that alienated us from both our Asian peers and our Western peers.

Never Asian enough and never Western enough, we constantly straddled a line. In this way, Asian-Americans, Asian-Canadians, Asian-Australians, and Asians living in other Western countries have all developed our own unique identity — one that is rooted in duality, conflict, and isolation.

“This group was a long time coming,” Zhou said. “It’s scratching a collective itch that so many of us had for a broader sense of belonging with Asians across the world.”

This sense of loneliness and yearning for acceptance, Kim speculates, has been around for generations, ever since our parents immigrated and tried to adapt to a new culture.