The sixteen day Northern China anti-child trafficking and child rescue activities had concluded. It consisted of two parts, the citizen’s anti-trafficking conference and the educational convoy that travelled through five provinces.

These actions happened after the northern Child Search organizations suffered many setbacks in recent years. The causes of these setbacks included inadequate methods of parents searching for their missing children, lack of organization and financial resources. The most important impediment was that the government considered many of these parents as “destabilizing factors”. Some desperate parents who did not succeed through years of searching often resorted to frequent petitions to the government. As a result of government attitude, parents could only stay home helplessly or wander aimlessly looking for their offspring, even coming into conflict with local police authorities. Civilian’s child search activities therefore were in a state of chaos.

With the invitation of the northern league, WRIC decided to hold these recent projects in rural areas in Henan, Hebei, Shandong, Shanxi and Shaanxi provinces where child trafficking was a particularly severe problem.

On December 8th, WRIC director Yao Cheng arrived in Zhengzhou, Henan. Representatives of child search organizations from different parts of the country planned to arrive by the 11th. However in the afternoon of the 10th, Zhengzhou police arrested Henan members who were responsible for the reception of the representatives. Other Henan members who were planning to attend were also under police control.

Plans had to be changed at this point. The conference was postponed. Representatives convened in Xinxiang, Henan on the 13th.On the afternoon of December 14th, the First Huijiawang Chinese Citizens’ Anti-Child Trafficking Conference commenced at the Huangguan Jiari Hotel in Xinxiang. Over twenty representatives from Henan, Hebei, Shandong, Shanxi, Shaanxi, Guizhou, Zhejiang, Guangdong and other locales attended. The agenda consisted of three items. The first was the legal problems citizens’ child rescue activities faced; The second was the exchange of information of kidnapped children; The third was the discussion on the next anti-trafficking plans. 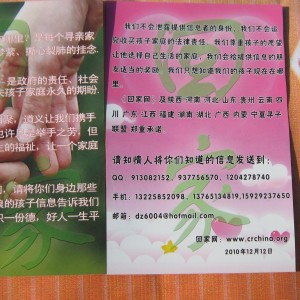 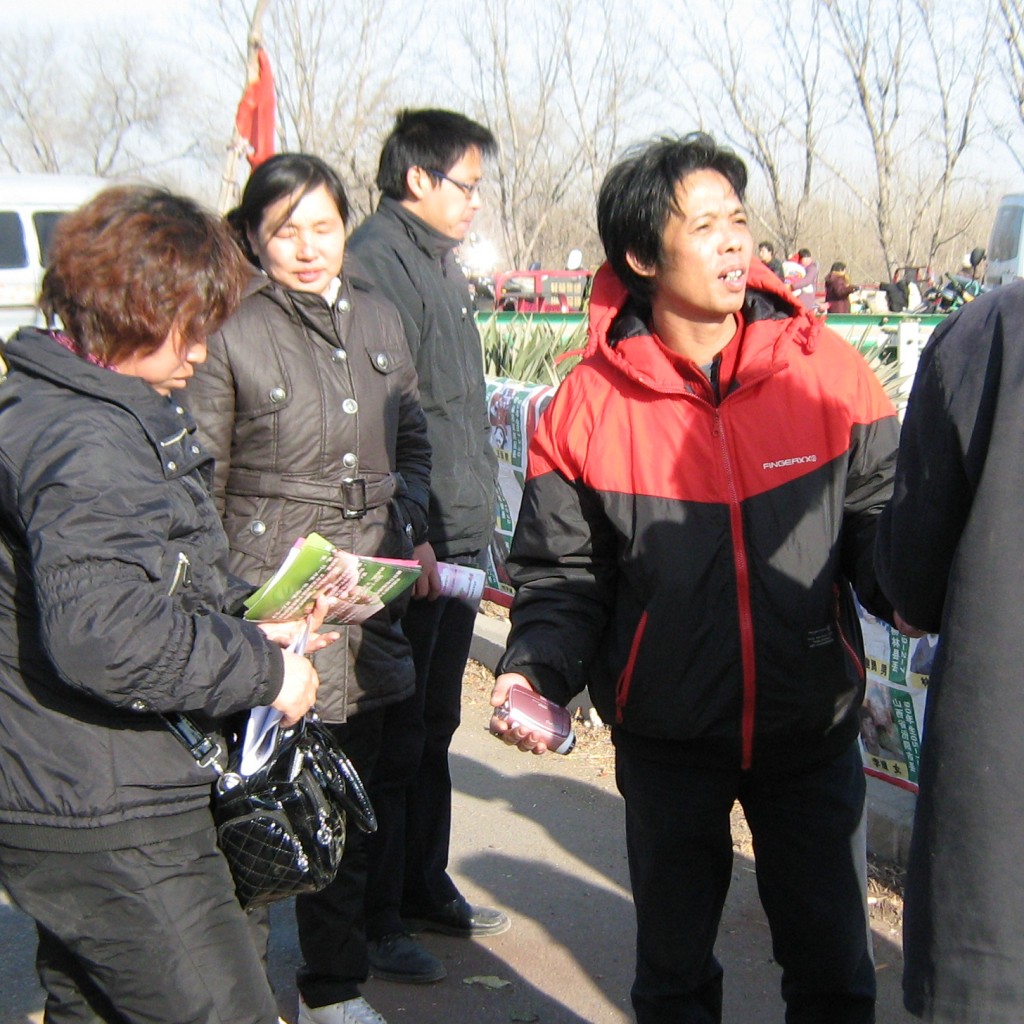 During two days’ discussions, free and independent debates flourished. The outcome exceeded expectations. The first beneficial result was the clarification of thinking. During the conference, representatives concluded that all activities were aimed at finding the lost children. A kidnapped child meant a destroyed family. Without the return of the child, parents vowed, they would never stop searching.

In the opinion of the conference, the government had the foremost responsibility in child search activities. With its control of the power of the law, if the government really put effort into it, finding more lost children should not have been a problem. With effort from the government, the parents reasoned, it would be easy to stay patient even if their own children remained missing. Under current circumstances, to foster better working environments for civilian efforts, it was necessary to refrain from some radical actions and remain rational. But it was also necessary to communicate the desires and requests of the parents to the government. In-person petitions to Beijing should be replaced by written ones. The conference decided to reflect in writing the difficulties the parents faced in hopes of better cooperation of governmental authorities for faster and more return of the children.

During the discussion of legal issues, representatives expressed many opinions on our activities’ legality, the functions of the government and the parents’ rights and obligations. Mr. Jiang Tianyong, an attorney of the Beijing Gaobolonghua legal office answered every question. Regarding the responsibility of the government, Mr. Jiang reasoned that child trafficking was at least the failure of public safety. Child search should be mainly the responsibility of the government. It should not target the parents as subversive elements merely because of some petitions. The parents had no political aspirations. They only wanted the government to assist in looking for their missing children. More tolerance on the government’s part was called for. It should devote the resources it used to monitor the parents into searching for the children instead. Only this could solve the petition “problem”.

The second agenda was the exchange of information. Mr. Chen Puyu of the Guizhou child search league shared the successful experiences of that organization. Guizhou had suffered severe child trafficking problems, which also started very early in that province. Civilian activities to recover kidnapped children started more than twenty years ago through the individual efforts of parents who gradually became organized. So far they had found more than one hundred lost children. Cooperation existed not only between parents, but also existed between the parents and the government and media. Recently, with the help of Huijiawang and other civil society organizations, Guizhou had successful results almost every year.

The conference recognized that it was necessary to strengthen in the future intra- and inter-provincial cooperation, particularly between northern and southern provinces. The flow of trafficked children seemed to be of the southerly direction. Many northern children were sold into the south. Although there were also some southern children who were sold in the north. Only through mutual assistance, achieving common sharing of information, could we increase the efficiency of our efforts. Future efforts would necessarily be through the internet, particularly WRIC  as a platform.

Conference attendees gave Huijiawang’s efforts high praises. They also gave many suggestions and comments to improve WRIC  as a bridge of the child rescue effort.

Finally, consensus was reached through northern and southern representatives’ discussions on concrete future steps. The emphasis should be tailored to current flow of kidnapped children, focusing on Fujian, Guangdong, Hebei and coastal areas of Shandong, border areas between provinces, rural areas, particularly the schools and family workshops in those areas. The targets of the search should be on lost children who were looking for their families. Older children who retained memories of their original homes and the desire to search for their parent had much higher chances of success than parents searching for their lost children. To facilitate this, we would make more educational material aimed at children, to increase the ability of trafficked children to receive assistance. On the question of organization, individual actions of parents should be avoided as much as possible. Most parents through years of searching had exhausted their financial resources. Concentrated organizations would expend such resources more efficiently. It would also more easily reach respectable scale, hopefully ensuring better safety for activists.