Under the Heavy Sun: the Working Women of Bijie’s Villages

You are here:
Assistance for Rural Girls 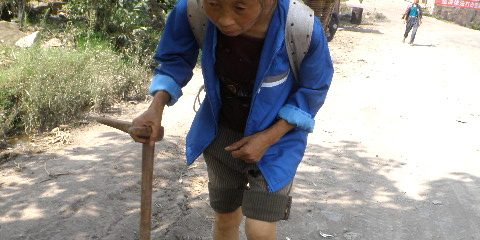 Even in late September, Bijie, Guizhou’s temperature can rise to more than 35 Celsius. Walking under the sun makes you feel as if your hair is on fire. Sweat leaks out of one’s body like a leaking pipe

A city dweller stays indoors with modern air conditioning, far away from the manual labor going on in the fields. However, villagers, especially those from poor families, cannot avoid such jobs. Women and men, ranging from sixty to seventy year old grandmothers to young newlyweds, have to till the soil under the burning heat or carry heavy loads through the mountains.
On the 20th and 21st of September 2011, I traveled through the Haizijie, Heguantun and Zhuchang districts of Bijie. I took many pictures of women doing hard labor in the rural areas. The purpose of these photos is not to elicit instant “respect” of these women; for them, mere respect is far from enough. 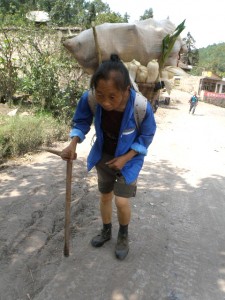 Perhaps her sons and daughters have all migrated to better jobs, this old woman has become the main workforce in her fields. From dawn to dusk, who knows how many thousand pounds of corn she would have to carry. (Photo by WRIC) 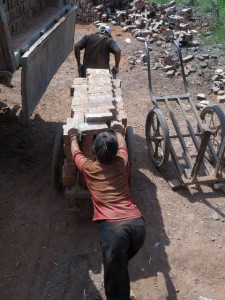 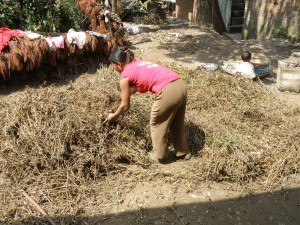 As her parents carry bricks to the truck, the baby sleeps under the bridge, oblivious to the flies on her face and behind. She stays quiet amidst her parents’ back breaking work. (Photo by WRIC) 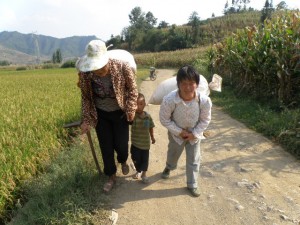 I do not know where they were from, where they were going, whether they were from the same family or only neighbors. But I do know that this was their daily work. City residents can think leisurely of retirement. So long as they can still walk, villagers would always have to work. (Photo by WRIC) 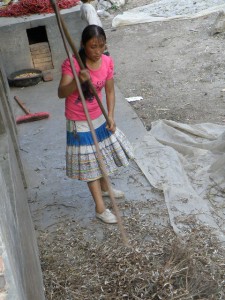 This Miao woman is using a tool unique to this region of Guizhou Hill Country to separate the bean crop. After sowing, tending and harvesting she would still have many more steps to go before she can make tofu. The soy needs to be ground into powder, boiled into a milk, and coagulant added.
(Photo by WRIC) 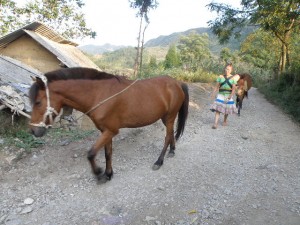 Dusk on the mountainside, this Miao woman in traditional dress leads two horses. A baby sleeps on her back, probably her grandson. She’s hurrying home. Feeding the family and their livestock are both her responsibilities.(Photo by WRIC) 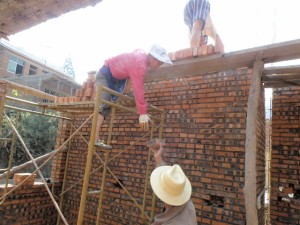 In the old days, women were prohibited in construction because they were thought to bring bad luck on the sites. After“liberation”, women now work like men in the building trade, even carrying heavy bricks up the scaffolds.(Photo by WRIC) 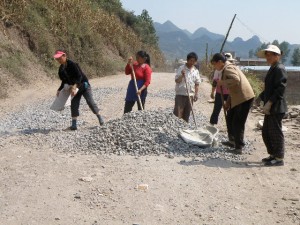 Six road maintenance workers with temporary employment, only one man among them.
(Photo by WRIC) 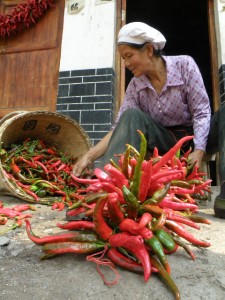 A grandmother of over seventy could not go into the fields anymore. She nonetheless works by stringing hot pepper. The bright red strands look more like works of art from an experienced hand.(Photo by WRIC) 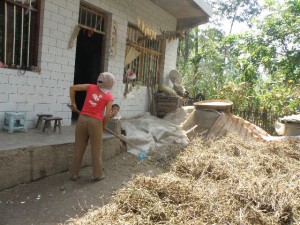 When I was sent here during the Cultural Revolution, she was still a baby on her mother’s back.Now she’s a mother, and carries packages weighing over 120 pounds every day with heavy    steps.Her parents are still poor. She could but shoulder the heavy burden of a family’s livelihood.(Photo by WRIC) 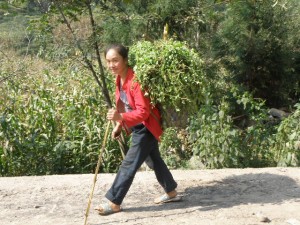 She walks in broad and rapid strides. What urgent housework awaits her that she is walking so fast while carrying so much? This style of large basket is usually associated with men. To get by, she has no choice but to carry them also. Perhaps there is some truth in the blustery propaganda that “women could carry half the sky”.(Photo by WRIC) 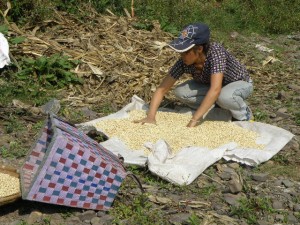 There are no machines, only handheld tools. Work here has not changed substantially from six or seven decades ago.(Photo by WRIC) 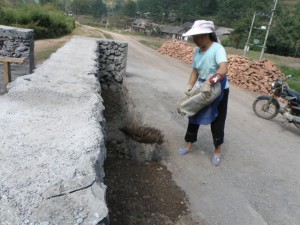 This elderly woman is alone. Her husband is long gone. None of her three children care about her. Living in an old wooden house, “I’ll only eat as much as I can carry. When I die, just bury me in my home.” She has no hope or illusions in anybody.(Photo by WRIC) 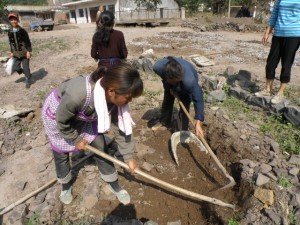 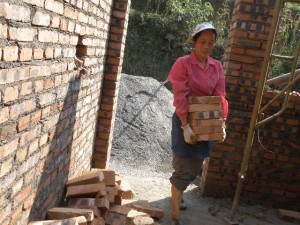 The men do the “technical” work of shaping the bricks. Women have to carry the raw material and formed bricks, by far the heavier half of manual labor.(Photo by WRIC)
Category: Assistance for Rural GirlsBy wrchinaJune 12, 2013Leave a comment