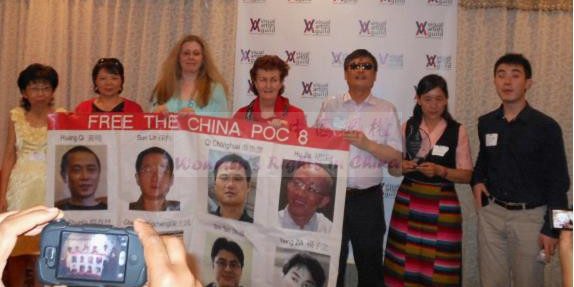 By CUSIB on 05 June 2013 in Featured News, Hot Tub Blog with No Comments

This report is from the independent Committee for U.S. International Broadcasting (CUSIB – cusib.org). CUSIB’s Executive Director Ann Noonan has spoken at recent Broadcasting Board of Governors (BBG) meetings as a member of the public on the importance of U.S. international broadcasts to nations without free media. 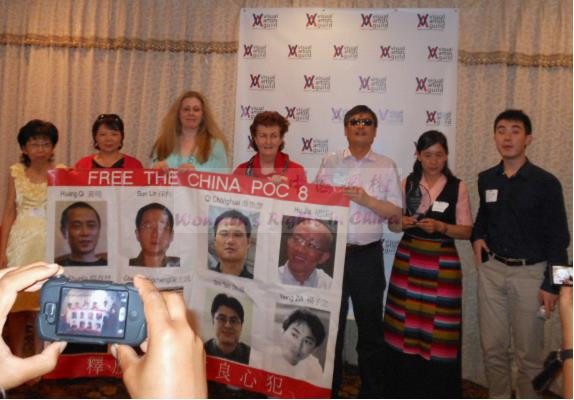 CUSIB Executive Director and former President of the Visual Artist Guild, Ann Noonan, had recommended the three sitting Governors for the award for their “leadership and advocacy for journalistic expression throughout the world.”  Each of the BBG Governors had prior commitments that prevented them from receiving the 2013 Champion of Free Speech Awards in person.  Visual Artists Guild Chair, Ann Lau, and NY Chapter President, Peggy Chane, expressed their hope that they will join them next year to be honored in person at the Award’s 25th Anniversary.

“It was an incredible honor to meet Chen Guangcheng in person. When he first came to the United States, he spoke very strongly about how important VOA China radio services were to him, and how much hope those radio broadcasts gave to him when his was in prison,” stated Ann Noonan.  “It is essential for RFA and VOA Mandarin, Cantonese, and Tibetan services to maintain radio broadcasts.  Good and accurate information is vital for prisoners of conscience and freedom fighters in China and in other nations that prohibit media freedom.  VOA and RFA broadcasts are not only a source of uncensored news, but also hope.  These services are provided by American taxpayers, and these broadcasts show their solidarity with victims of human rights abuses.”

“We applaud the Visual Artists Guild for highlighting the plight of Tibetan film maker Dhondup Wangchen and honoring him in abstentia,” stated Ann Noonan. “It was a great honor to meet his wife, Llamo Tso, at the event.  Her courage to share her husband’s story is tremendous, and I am hopeful that her campaign to tell his story and the story of other Tibetan prisoners of conscience will be heard and that justice will prevail.”
New York State Senator Ruben Diaz (D-Bronx) prepared Senate Resolutions that were approved by the State Senate for Chen Guangcheng and Dhondhup Wangchen.  The Senate Resolutions were presented on behalf of Senator Diaz by Ann Noonan.

The Visual Artists Guild 2013 Tiananmen Commemoration Dinner message is as follows:  “In the spring of 1989, Beijing erupted with the largest spontaneous demonstrations the Peoples’ Republic of China had witnessed in its 40-year history.  The pro-democracy movement quickly spread to over 30 cities around China before the world witnessed the horrors of the government’s brutal crackdown.  As the Chinese people fled from the tanks and guns, they asked the international press to let the world know the truth. They asked the world not to forget.”