At 10 o’clock on the morning of September 8, 2010, at a farmer’s house in Haizi Street, Bijie City, Guizhou Province, a baby girl born at 9 o’clock in the morning of the first day seemed to know that there was a camera lens facing her. She opened her small, round mouth twice, and yawned as if she was relieved, as if to confess to the world: a mother who had been hiding for ten months like she was a thief, finally safely birthed me. I was born; I finally escaped the baby girl killers, and I came to the world with “great success.” Yes, telling the truth like a thief, falling in love like a thief and living with a husband like a thief is a reality to some. To have children, for some, you must also sneak and hide like a real thief.

Under the jurisdiction of the “National policy” of family planning, it is commonplace, to no surprise to anybody. Gu Guangyan, a 33-year-old woman in China, is such a sad person, though “successful” in giving birth. 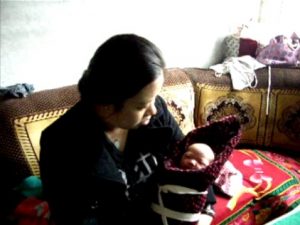 At the end of 2009, Gu Guangyan and 37-year-old Mr. Yao Guiping, who also worked in Zhijin County, a neighboring county, found out Gu Guangyan was pregnant. At that point, the couple already had a five-year-old daughter and a one-year-old girl. They couldn’t wait for their third child to be a boy. However, according to the result of the B-ultrasound examination, Gu Guangyan’s pregnancy was of a baby girl.

On the day of the ultrasound, there was another couple. They also had a little girl on the way. Regardless of the life of the child who has already formed in the womb, regardless of the tears of the grief-stricken mother, the mother had to go through an abortion.

Everything was cruel and hard for the Gu Guangyan couple to endure, and they trembled, afraid. The daughter was still a human being. Although only a fetus, she already had life, and must knew the pain.

How can we, as parents, let our daughter be slaughtered by another? They decided to accept fate’s arrangement, and the mother proceeded to give birth to her daughter.

After knowing the “unfortunate” news of the daughter-in-law and the pregnant woman, Yao Guiping’s parents resolutely said to them: “Beat it down and start from scratch. We don’t believe you. You can’t give birth to a grandson for us.” The abortion process and the thoughts that Yao Guiping had were told to the parents. He said that it is too cruel and too damaging to kill a daughter who will walk, dance, talk and sing in the future. It is harder than killing yourself. “We have accepted our fate. We are going to give birth to this daughter and raise her. No one would want us to decide to turn our own flesh into mere garbage to be thrown into the sewer.”

Where there are pregnant women, there are family planning attachments. In order to be on the safe side, Gu Guangyan returned to Qinggang Village, Zhuchang Town, Bijie City, and lived with Yao Guiping’s parents. The father-in-law sighed and sighed. He always said, “If you have a son, you are good.”

The environment was dark and humid, which is not good for fetal development. The three lived there for a long time.

On the day after a summer vacation, Gu Guangyan sneaked into a relative’s place in Zhuchang Town on a dark night with high winds. The next morning, she left Zhu Chang and lived somewhere else that isn’t close. Haizi Town of Family Planning Station was only two or three hundred meters away from her family.

If you have money, you could choose a place with few people and have some peace to spend this period of time. However, you had to be careful of the overnight guerillas’ “sportsmen”.

The house of the maiden was originally rented to students. It had been in disrepair for a long time. The four walls were peeling off and the roof was leaking. “I dared not “openly” step out of the door with the windows covered with gauze. We ate food and lived like we were an underground party to deliver top secret information. Things were secretly sent by parents and relatives.” A woman present was shouting. This was like living a monitored or detained life.

More than a month before the expected date of birth, on July 26, 2010, Women’s Rights in China’s Rural Girls Assistance program led by a well-respected local person came to the “underground pregnant woman” Gu Guangyan for the first time. In China, where daughters are generally discriminated against, there are still people who actually “help the baby girl, ask questions, and send money”.

Overcome with sadness herself, Gu Guangyan complained about her own sufferings while crying. Her mother, also sighing and sighing, shook her head again and again: “Giving birth to a baby–it is more nerve-wracking than being a thief, and you can see it!”

On August 8th, the staff of the “Rural Girls Assistance program” heard someone at Haizi Street’s family planning station say that they would charge several thousand Yuan for litigation of two women whom they caught.

The “Rural Girls Assistance program” volunteer once again came to Gu Guangyan’s home to discuss. Gu Guangyan needed to change where she lived as she waited to go into labor so that the family planning station was far away in order to give birth to her child safely.

Some said that they had a solution and all should be fine. At the time of birth, they will look for the car to drive to the front of the door and go to the hospital.

It is said that the hospital and the family planning staff did not help Gu Guangyan.

On August 18th, Yao Guiping, who was about to return to work at Haizi Street, was seized and interrogated at the family planning station.

“It’s not like you don’t know my situation at home! Kill me, and you still can’t find enough money for you! I beg you for a few hundred Yuan as leniency” Yao Guiping cried. After several hours of bargaining, along with the pleading of family and friends who knew family planning staff, the final “transaction price” became 4,000 RMB.

On the morning of September 8, Li Yuanlong, a member of the Women’s Rights in China’s Rural Baby Girls Assistance Program, saw this “receipt” issued by the family planning staff at the uncle of Gu Guangyan. Zhu Guizhen, Yao Guiping, and Gu Guangyan handed over the deposit  to Qi Yuanzheng, who is an officer of Haizi Street Family Planning Station. The mother scheduled to come to Haizi Street Family Planning Station for surgery before August 20, 2010. There was also a note on the receipt: “If the surgery is not due, please exchange the official ticket in time,” and “The temporary deposit is due to the high official” and “Payee: 翟丽”. There was also a phone number: 18984418999. The purpose was to make the unscrupulous fine behavior appear “reasonable” and “humanized.”

By relying on the toughness and wisdom of another mother, the two-day-old female baby finally had her own name: Yao Siqi. In the middle of the “Women’s Rights in China’s Rural Baby Girls Assistance Program”, little Yao Siqi seemed care-free and relaxed in contrast to her mother’s hardships. 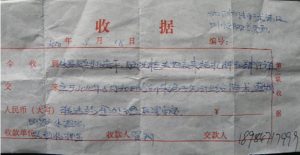 Gu Guangyan’s husband Yao Guiping showed Li Yuanlong a deposit of 4,000 yuan for the fee they paid to the family planning staff.

Little Yao Siqi certainly didn’t know, through yawns that looked comfortable and happy as the mother’s underwent underground pregnancy, living like a “thief”. They went through four hiding places.

To Siqi : Remember that your birth is the crystallization of your parents’ love for you. It is the victory of parents over family planning guerrilla tactics. It is the testimony of Christ’s gospel to love you and bathe you. In the Bible, Matthew says: “Let the children come to me. Do not ban them, because in heaven, there is already such a person.” God will continue to bless all the good mothers like your mother in the land of China. God will continue to bless all of you, yawning, like the thousands of yawning little girls currently in existence! God will bless. When thousands of girls like Yao Siqi will become mothers, they won’t need to be secretive. 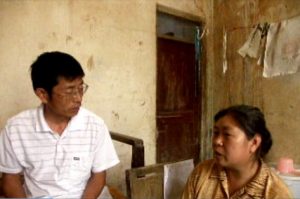 Gu Guangyan, who had just given birth to a child but still feared that the family planning staff would make an arrest, so she was forced to leave her young daughters in the care of their grandparents. The mother and her husband went to Shenzhen to integrate with the tide of migrant workers. They did not dare to go home to visit the children even after many years. (Photos: WRIC)