Laogai survivors worry about their museum and Voice of America

On the day when the world commemorates 70 years since the adoption of the Universal Declaration of Human Rights, waste bins outside the only Laogai Museum in the world in Washington DC were filled with valuable Laogai Research Foundation (LRF) books documenting China’s vast Laogai system of forced prison labor. China’s government must feel relieved. And why shouldn’t they be?

The discarded publications, in both English and Chinese, included reports and books, both hard cover and soft cover. There in the waste bins was published research including “Laogai Reports” and “Better Ten Graves than One Extra Birth: China’s Brutal One-Child Policy.” 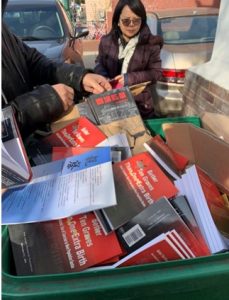 Jing Zhang discovered that waste bins outside the Laogai Museum in Washington DC were filled with valuable Laogai Research Foundation books Dec 11,2018. The Executive Director, Ms. Huang Ciping, also found that a large number of secretaries were thrown away from the door of the Laogai Museum same month.

The discarded books were in excellent condition, and were thankfully retrieved by Committee for U.S. International Broadcasting (CUSIB) Board Member Jing Zhang and two other Lagoai survivors who were in DC to participate in a Wei Jingsheng’s Symposium in Observance of 40th Anniversary of Beijing Democracy Wall, 4th “Human Rights Without Borders” Exhibition, and 4th “Human Rights and Freedom Defender” Prize Award Ceremony.

They saw the waste bins outside the Laogai Museum while visiting the premises. Thrown away as refuse were the survivors’ own personal stories and accounts of many other Laogai survivors. This former repository of their brave tales had become a scene out of “Fahrenheit 451”, but without the flames.

At a time when China has re-invigorated its Laogai system to oppress Uyghurs in the Xinjiang Province, Laogai survivors feel dishonored.

The refusal of those currently in charge of the Laogai Research Foundation to properly reopen the Laogai Museum in DC – the only Laogai Museum in the world – for scheduled tours, members of the public, and scholars, is nothing short of a disgrace. In the words of Harry Wu, who was an ardent supporter of US broadcasts to China and member of CUSIB’s Advisory Board until his sudden death in 2016: “But to forget is to betray.”

How can the present management, or those who served since Harry Wu’s death keep such a valuable resource about the Laogai system hidden from those who would learn from it? The documents and artifacts contained in that building were to be available for research and scholars – and for the general public – and can refute many of China’s defense claims about their human rights atrocities. Can there ever be a more important time to make this information known?

Or is this the time to throw them in the garbage?

Of course, Laogai survivors, some who have contributed artifacts and documents for display and research at the Laogai Museum are truly upset that the current management has shuttered the doors except for nominal visits, and employees are in the process of throwing out books that document the Laogai survivors’ suffering.

Adding further insult to injury, an employee told the visiting Laogai survivors of an unconfirmed rumor that the museum’s building might be sold.

Prior to Harry Wu’s death, he and the museum staff worked with the US Department of Homeland Security to identify products made through forced labor in China’s Laogai. They planned to host a photo exhibit to highlight Nobel Peace Prize Winner Liu Xiaobo and a photo exhibit about the plight of Tibet. They planned to co-host a conference with the Cato Institute about the 50th Anniversary of the Cultural Revolution and its impact on human rights in China. They planned to continue to hold quarterly lectures series with the American University students and faculty, and the publication of a book to be authored by former Congressman Frank Wolf. All of these projects and plans required reliance on and the dedication of the Laogai Museum staff.

When the Laogai Museum closed in December, 2016, the entire staff was fired by the management. The Laogai Research Foundation staff then commenced a lawsuit.

The status of the Laogai Museum must now be addressed by the current management which is responsible for warehousing all the artifacts, the museum’s collected works, an entire third floor of documents intended for research in a building which remains closed and unavailable to the public.

The Laogai Museum’s relevance is clear, and we should not let this resource disappear.

We must also remain vigilant about Voice of America China services, the quality of VOA broadcasts, and the willingness of VOA management to permit the opinions of China’s communist leaders in VOA programs without properly countering their propaganda and disinformation with voices of critics and victims of communism such as those that were once presented in the Laogai Museum.