You are here:
Child BridesEventsNewsnunnery 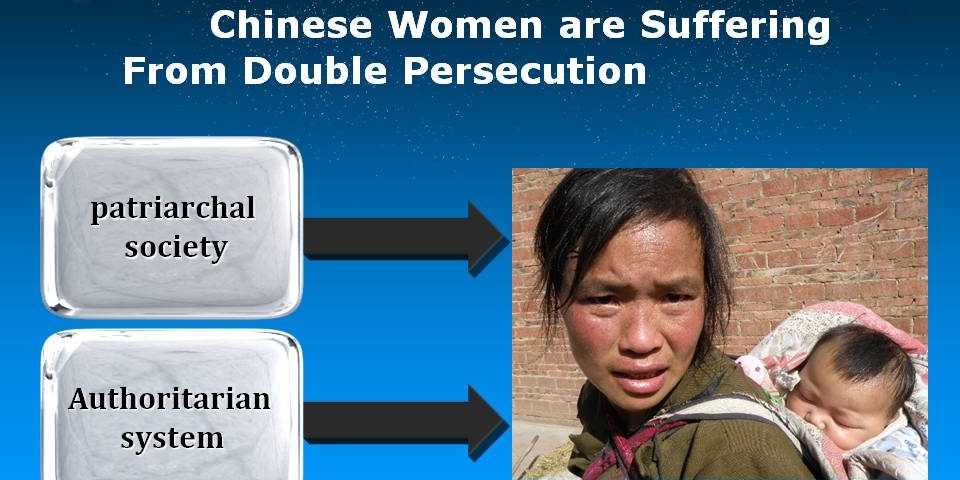 The human rights situation in China has not improved with the rapid economic growth, especially for the majority of vulnerable women, including abandoned and abducted children. In fact, they are suffering from double persecution. First, there is the traditional patriarchal culture. Second, the Chinese government made many law or policies that are not fair to females, and the worst one was the One Child Policy. Chinese society has experienced unprecedented humanitarian disasters. The crimes of abandoning, abducting, and killing female infants is rampant. In short, the One Child policy is most devastating man-made disaster. This disaster has the most homicides, widespread victims, and deepest pain in the longest time ever. 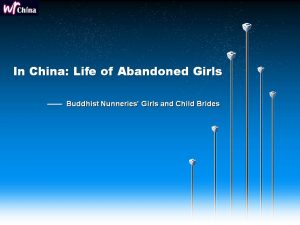 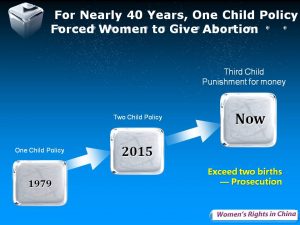 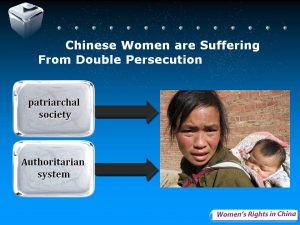 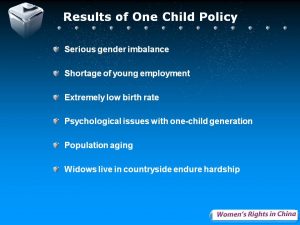 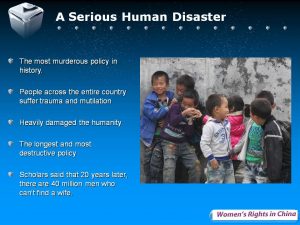 Today, I will focus on two vulnerable groups that have received little attention in China: The abandoned girls at Buddhist nunneries and child brides. Both groups were hurt by the Chinese government’s policies.

The traditional concept of valuing only the male child is deeply rooted in China, and the harsh one-child policy has led many Chinese parents to abandon their baby girls in order to preserve the opportunity of having a boy. Some parents believe that Buddhists are merciful and leave their female children to the care of the nunneries. 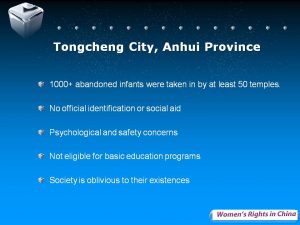 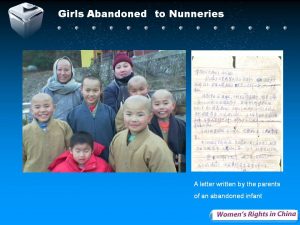 There are more than 50 nunneries in Tongcheng, Anhui Province. Each nunnery has adopted several to dozens of abandoned girls, with an estimated total of more than 1,000 in Tongcheng alone.  The nuns said, when they opened the door in the morning, they often saw an infant with some small clothes in a basket, and a short handwritten letter containing the date of her birth and thanks. Sometimes, the baby had been frozen or bitten by wild dogs to point of death.  Nobody knows their surnames, so they are all given the surname of Buddha, “Shi”.

8 years ago, an infant with weighing less than one kilogram was found abandoned on a haystack beside Jingtulianshe nunnery on verge of death. WRIC’s volunteers and nuns took her to the hospital together. After more than three months of rescue, she survived, and was named Shi Zongyuan.

Shi Chengyuan was brought to a Buddhist nunnery by her family to burn incense at age 5. Then her family abandoned her. There was a note with her birthday in her pocket. Ever since nuns raised her, she has grown up and taken on the duties as a nun. From the beneficiary of the WRIC’s project of Assistance for Girls in Nunnery, Shi Chengyuan became a volunteer for it and is willing to help all those in need. 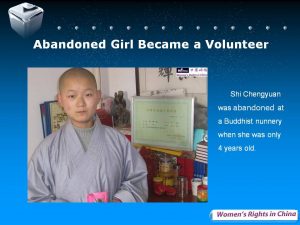 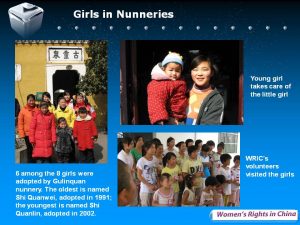 Nunneries are usually very poor because of little contributions from believers who mainly worship and dedicate to big temples with monks. With so many girls to raise, it has become even more difficult. Some children have significantly worse physical development than their peers . There are also many children who died or ran away. Five girls at Dobao nunnery left after their master passed away and nobody knows where they are.

Also, some nuns treat girls as personal belongings by forbidding them to go to school for education and mandating them to be Buddhist nuns. 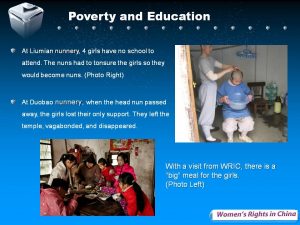 What worries nuns the most is education of the girls because they have no birth certificates. This means no household registration or eligibility for social welfare, and they have to pay high tuition fees to go to school. WRIC’s volunteers have repeatedly negotiated with the local government for considerations and assistance. Since 2013, children have received 600 Yuan per person every month as an orphan allowance. However, education is still a luxury to them. Over the past 30 years, there have been very few female college students raised by nunneries in Tongcheng. 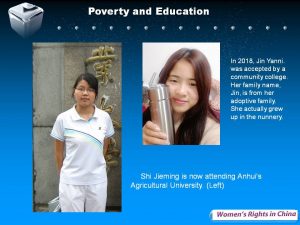 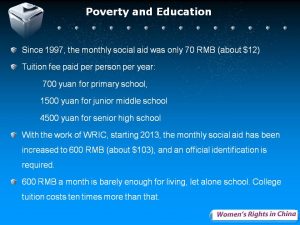 These girls have not only psychological problems, but they also have no personal safety at all. A migrant worker raped Shi Liuyin, an 17 year old girl of Gulingquan nunnery, causing her to become pregnant. Eight months later, WRIC volunteers learned her story and found her at a dilapidated temple in mountains, lonely and helpless. They let her live in the home of a volunteer. She was sponsored by WRIC and escaped compulsory abortion. Finally, she gave birth to a girl who is still being raised in the nunnery. 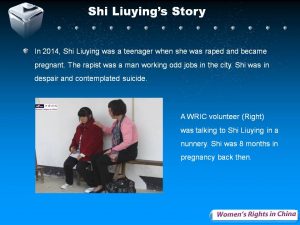 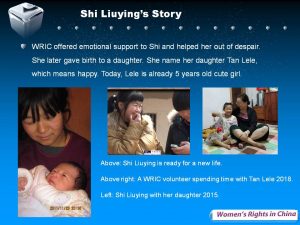 At present, the Chinese government requires girls to go to the Welfare center for children (official orphanage) if they want to get orphan subsidies. These poor girls were abandoned by their parents because of the government’s one-child policy, and now government’s another policy has forced them to leave the nunneries where they grew up. Their lives have been destroyed again.

What are the official orphanages? They can legally deal with the adoption of orphans, and thus obtain amazing profits, especially when it comes to foreign-related adoption. Official orphanages have been exposed repeatedly as scandals of illegal sales of babies and child abuse. Please take a look at “The ORPHANS OF SHAO”, a book published by WRIC. 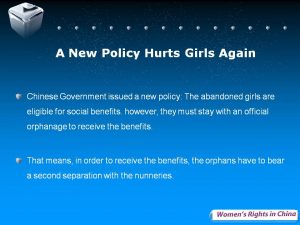 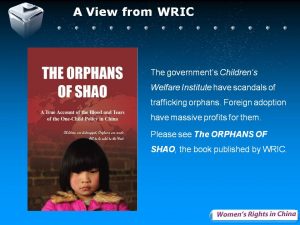 Next I want to talk about another neglected vulnerable group, the modern child brides in China.

Betrothed children has been part of the long history in China. After 1949, they were rarely heard of. But since China enforced the One child policy in the late 1970s, the patriarchal culture also resurfaced and that came with child brides. The severest situation has been happening in Putian, Fujian province. According to the WRIC survey, the number of child brides from Putian rose dramatically high in 1983. The government’s One child policy has played a major role in fueling the situation. 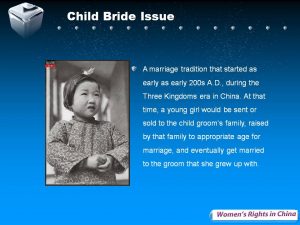 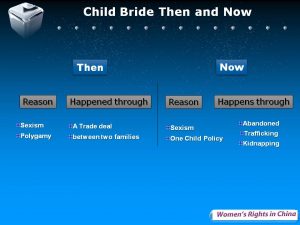 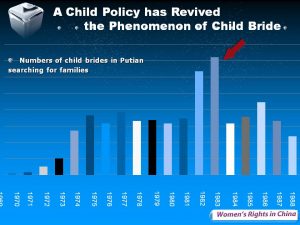 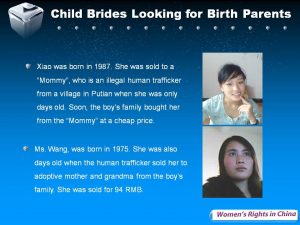 A child bride named Wang said that 31 years ago, her adoptive mother bought her from a trafficker for 94 Yuan.

A child bride was killed by her husband in Putian, but the local official did not care and answered the reporter: If they are not allowed to have a child bride, can you help them find wives?

Since 2009, WRIC has held several activities in Putian to search the child brides’ relatives, and has helped three child brides find their families from Guizhou province several thousand kilometers away. They were all abducted when they were kids. WRIC also successfully helped 15 girls find their biological parents through DNA comparison. 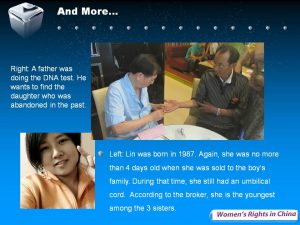 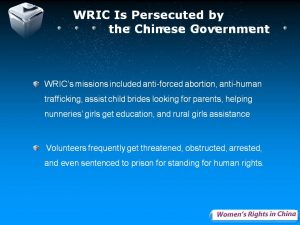 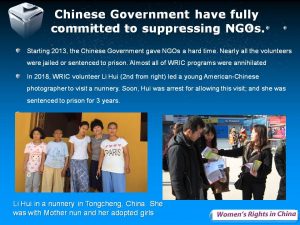 Originally, it was the responsibility of the government to solve these social problems. But what the Chinese government has done is cruelly cracking down on charitable organizations like WRIC. In the five Chinese projects of WRIC, volunteers were always criticized, threatened, chased, blocked, arrested, imprisoned and sentenced.

Since 2012, almost all WRIC volunteers have been detained and sentenced, and the project has suffered a fatal blow. On behalf of all the members of WRIC and the recipients of our projects, I would like to pay the highest tribute to the political persecuted volunteers of WRIC! 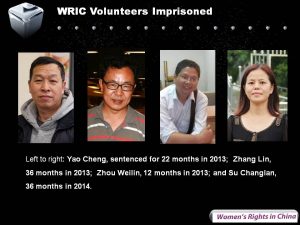 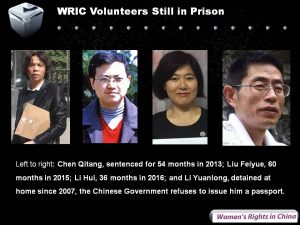 Girls in nunneries and child brides are just the tip of the iceberg for China’s vulnerable groups. The Chinese government ignores the suffering of these vulnerable groups and refuses to take responsibility. They even close all information about one child policy victims, deaths and damages to the top state of confidentiality. This is unfair, malfeasant and criminal to all Chinese people, especially women and children. The Chinese government must face the history, take responsibility, and compensate all victims. WRIC will continue to appeal for women and children under the dual persecution of autocratic power and patriarchal society. Pay attention to vulnerable groups such as nunnery girls and child brides, and continue to fight for their basic rights and interests. 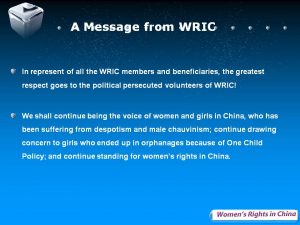 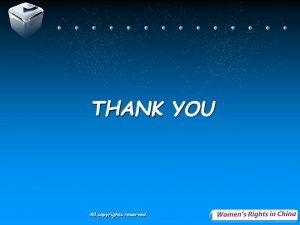