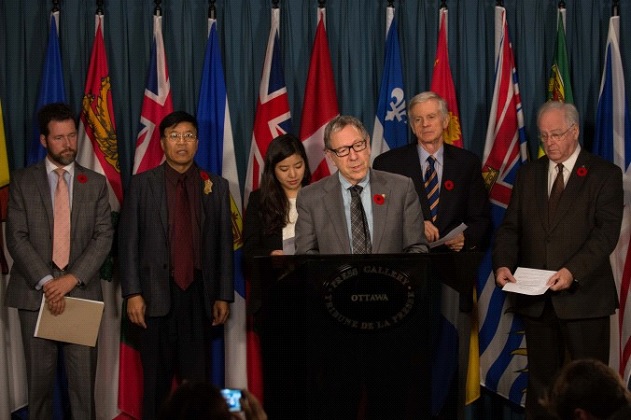 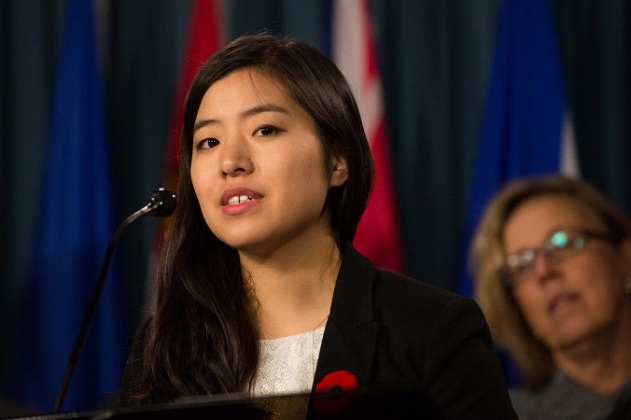 Ti-Anna Wang called on Prime Minister Stephen Harper during a Parliament Hill press conference on Nov. 5, 2014, to ask the Chinese leadership to release her father, Wang Bingzhang, a democracy activist who studied at McGill University and has been held in solitary confinement in China for 12 years. Behind her is Green Party leader Elizabeth May. (Matthew Little/Epoch Times)
OTTAWA—Ti-Anna Wang didn’t really understand her father. His endless efforts to push China toward democracy sent him around the world, and his political activism put him at odds with the family.
She was 13 when her father, Dr. Wang Bingzhang, was abducted from Vietnam in 2002 and handed over to Chinese police to be tried in China. Since then he has been serving a life sentence in solitary confinement.
Dr. Wang is a hero to many, a man who walked away from a lucrative medical career in hopes of changing his country for the better. He founded the overseas Chinese democracy movement, and travelled the world in that pursuit.
His Canadian ties are solid. Wang got his PhD at McGill University, where his daughter is now in her first year of law school, a career choice inspired by her father. Wang left behind a family here, including Ti-Anna and her two brothers.
She didn’t understand him so well when she was young, she said. His activism took him away from her. Now, 12 years later, she knows better who her father is.
“He is very much more present in my life now,” she said, speaking of her feelings and thoughts about her father.
Ti-Anna isn’t alone in her effort to free her dad. Her uncle, Wang Bingwu, has been appealing on Parliament Hill for a week, and last year spent days on end in front of the Chinese Embassy in Ottawa calling for his brother’s release.
“It is unbelievable torture to my brother in solitary confinement for the last 12 years. My brother suffered three strokes. The first one was almost fatal … I don’t want to see him die in jail,” Wang Bingwu said.
Trumped Up Charges
On Wednesday Nov. 5, Ti-Anna was joined on Parliament Hill by MPs from every federal party in calling for Dr. Wang’s release.
Liberal MP Irwin Cotler said Wang’s imprisonment is an affront to international treaties both Canada and China have signed affirming basic rights.
“He was tried in secret … not permitted to speak, not permitted to rebut any of the charges against him, all of which were trumped up and fraudulent,” said Cotler during a press conference.
NDP MP Wayne Marston said there has been change at the top of the Chinese regime and with current leader Xi Jinping now taking the helm, it’s a good time for Prime Minister Stephen Harper to press for Wang’s release on his upcoming trip to China.
“There is possibly an opportunity here for some change. And it is my view and the view of the NDP that that is the time for our prime minister to bring to the fore the human rights issues.”
“It is critical and crucial that Canada resumes its leadership role in the field of international human rights,” said Marston.
Wang’s case has been carried by many MPs over the years, including former MP and Secretary of State David Kilgour, one of Canada’s foremost experts on China, according to Cotler.
Kilgour said Xi has promised profound change in China, and now is the time to prove it.
“Releasing Dr. Wang would show both the Chinese people and the world that Xi intends to stand by what he says,” Kilgour said.
Conservative MP Scott Reid also lent his support, as did Green Party leader Elizabeth May who said Canada must insist Dr. Wang be freed and returned to Canada.
Committed to the Cause
Ti-Anna has always been careful not to criticize the Chinese regime, hoping that small deference would help ease her father’s release. To date, it doesn’t seem to have helped, perhaps because of the stature of her father’s work.
“He is the founder of the overseas Chinese democracy movement and dedicated his life to promoting rule of law, freedom, and human rights in China,” she said.
He was sentenced for espionage and terrorism, falsified charges used to justify his punishment.
“In a country without meaningful rule of law, my family has no means to legally appeal my father’s conviction despite having secured exonerating evidence for the graver charges against him,” said Ti-Anna.
Her advocacy on his behalf has led the Chinese regime to refuse her a visa to go there. She hasn’t seen her father in five years. That hasn’t weakened her resolve, she said.
“Even though it’s been so long that the case has dragged on, in a sense I feel more committed now because I have a better understanding of what is going on,” she said.
But the time and effort takes a toll, she added. “There’s just this fatigue in a sense, emotionally and physically and even financially. But on the other hand I also feel very committed to the cause as a whole.”
She wants the Canadian government to intervene more assertively on her father’s behalf and for Harper to use all diplomatic opportunities to secure the release of her father.
High-level diplomacy is her greatest hope for freeing her father she said, and she wanted all MPs to call on Harper to that end.
“It was the very values espoused by Canada and other democracies that inspired my father. If we cannot turn to this government and its leaders to advocate for his release, to whom can we turn?”