In the Chinese text, Liao Yiwu, A close friend of Liu Xiaobo couple writes that he has just provided through an intermediary to a US government official a copy of a handwritten note that Liu Xiaobo’s wife, Liu Xia, had sent some time ago, after having discussed the matter with Liu Xiaobo to the Chinese Public Security Bureau National Security Detachment (Guobao) requesting that Liu Xiaobo be allowed to leave China to get medical treatment. Liao Yiwu has also shared those notes with the German government. He adds now the U.S., German, and Chinese governments have a copy of Liu Xia’s handwritten note. 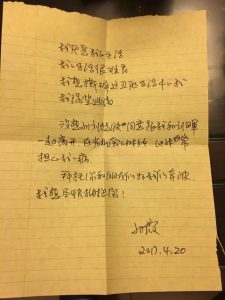 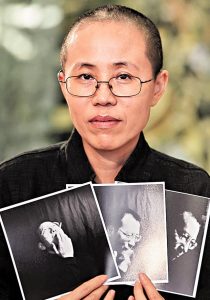 I can hardly believe that Xiaobo agreed to leave China together with me and [my brother] Liu Hui. When he finally learned about it, he was very concerned about my illness.

I am grateful to you and to our friends for everything you’ve been doing and cannot wait to embrace you.