On March 31, 2017, women’s rights activist Ms. Su Changlan was sentenced by the Guangdong Fuoshan Intermediate Court to three years for “subverting national government” to three years in prison plus three more years without political rights. Ms. Su had already been illegally detained for two and half years through numerous delays of court dates. Her alleged subversions amounted to interviews and reports of civilian petitioner Ma Shenfen and an expose of the abuse and death of Cao Shunli, published on the WRIC website and attributed to her by the Chinese government. The judgment, lacking concrete instances of subversion, instead mentioned Women’s Rights in China nine times and WRIC founder Zhang Jing three times. Ms. Su and Ms. Zhang’s friendly Skype chats were used to pad the otherwise vacuous judgment, signifying the Xi Jinping regime’s renewed suppression of non-governmental organizations and an era of NGO frost in China.

Articles published by Ms. Su on www.wrchina.org included only reporting on the rights and welfare of women and children in China, searches for missing children and renuiting kidnapped child brides in Fujian Province with their parents. Contrary to the court judgment’s allegations of “fraud and libel”, each report and interview was verifiable and factual, with real events and persons, from the charitable and humanitarian perspective. In comparison, the Fuoshan Intermediate Court was the glaring example of obfuscation and slander. Su Changlan was arrested in October, 2014 for “spreading information about Occupy Hong Kong”. She subsequently spent two and half years behind bars, after the Guangdong Superior Court had to unprecedentedly grant the government four delays in the case. Deviating from legal procedure, the police refused to admit any mistake or release her. Ms. Su, in ill health, frequently went on hunger strikes and was determined to resist her unlawful detention.

Women’s Rights in China is a non-profit organization registered in the United States in 2008. WRIC’s projects in China, in charitable cooperation with women’s and children’s human rights organizations, included the search for missing children, assistance for abandoned female infants in nunneries, reuniting child brides in Fujian through investigations and DNA collection, legal aid for victims of governmental population control and milk subsidies for baby girls in the countryside. The Chinese government not only did not assist these activities in any way, but regarded WRIC as an enemy and obstructed and suppressed its activities. The Xi Jingping government has declared that all foreign human rights NGO’s as hostile organizations and actively oppressed and purged domestic civil society organizations in contravention to universal humanitarian principles.

WRIC strongly condemns Ms. Su Changlang’s prison sentence as a blatant assault on the conscience of China. WRIC takes pride in Ms. Su and is proud to count her as one of her volunteers. She stated in her trial, “I love my country deeply. I love even more every citizen who lived on its soil, the people who are suffering from inhumane oppression. The mechanism of the government put me in the chair of the accused. The glare from the emblem of the state in front of me seems to be fading. But the strength of justice has let me see the light of hope. I am innocent.” (http://www.wrchina.org/archives/5120) WRIC will not submit to oppressive power, and will continue to defend the rights and welfare of women and children in China. 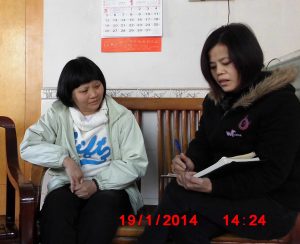