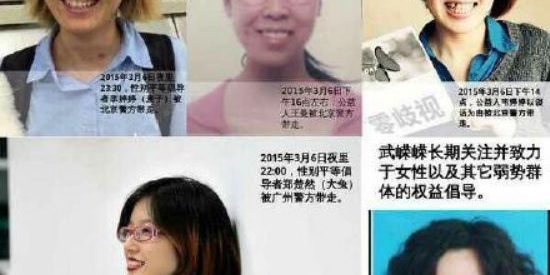 A group of young persistent female leaders who have been pushing for a feminist movement in China plan to fully launch activities to promote “Mechanisms to Prevent and Redress sexual harassment” in Beijing at the opportune timing of Women’s Day and the date of meetings for both the National People’s Congress and Chinese People’s Political Consultative Conference (CPPCC). In January, they had already drafted and promoted their “Suggestions on Establishing Mechanisms to Combat Sexual Harassment on Public Transportation” in Guangdong. The recent activity’s theme is “Stop sexual harassment, we need a safe environment”. Activists published promotional material in full color to popularize the proposed law, hoping to raise concern from the representatives of the congress and the media. However, those who participated in the activity on 6 March, namely Zheng Churan, Li Tingting, Xu Ting, Wu Rongrong, Yu Lian, Wei Tingting and Wang Man, were subsequently arrested by the police and locked up in Beijing. Up to now, besides Xu Ting and Yu Lian, who were released, the other five women are still in criminal detention. Women’s Rights in China sees this as a brutal act of random arrest and an abuse of power. It is crude behavior which shows that the Chinese government is openly disregarding human rights and women’s rights, even under the public eye. 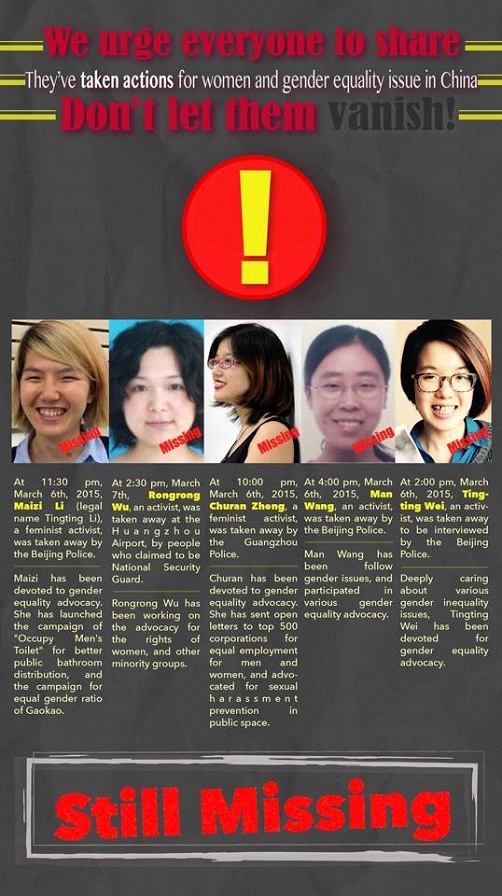 It is a well-known fact that domestic violence, gender  inequality, keeping concubines and sexual harassment are  the four major issues that torment women in China. A few  hundred million women and children are living under an  environment with no security mechanisms. Although the  public has long been concerned about domestic violence and  sexual harassment, and has advocated and made proposals  for legislation to combat these problems, the laws have still  not been passed for all these years. According to a survey  conducted by Sina.com, 84% women have faced different  levels of sexual harassment. The Chinese Social Science  Institute carried out a random survey of 169 women in Beijing,  Shanghai, Changsha and Xian, and 119 women said that they  were touched by male strangers in public settings, composing  of 70% of the interviewees. A survey by Guangzhou City  Women’s Federation in March, 2014 indicated that  approximately 80% of female university students looked  forward to progress on the anti-sexual harassment legislation,  showing that the issue of sexual harassment is becoming  more and more important to the Chinese public. All these  statistics are proof that sexual harassment is rampant in  China and that there is an urgent need for legislation to  protect girls and women, which is the responsibility that the  government cannot deny. Yet the People’s Congress is not  approving the relevant legislation, the police are ignoring  sexual harassment cases, and when a few women with a  sense of duty stand up to speak about it, they are arbitrarily  arrested and detained. These young women were only  speaking up to prevent women from disturbance, and physical  and mental harm. A sense of security is a basic psychological  need, next in importance to food and breathing. It is one of  the foundations for a harmonious society.

The young activists were put into danger before Women’s  Day. Their kind hopes became a disaster for them, but they  are true to their conscience and have a strong sense of duty.  Their contribution towards the women’s liberation movement  in China is irreplaceable.

A society is considered to be civilized not because of how  much filthy money it has, or how many dissidents it arrests to  demonstrate its limitless power; it is considered so because of its belief in law and its respect towards human rights, especially women’s and children’s rights: does the government protect these rights? How does the legal system safeguard these rights? This is a direct indication of the civilization level of a country’s leader. Women’s Rights in China strongly opposes the Xi Jinping government’s large-scale raids on dissidents, activists, journalists and academics, their suppression of independent NGOs and their confiscation of NGO property. This only harms the development of society. These are acts against humanity that go against the global trend, so it must stop! Women’s Rights in China requests the Beijing government to immediately release the five “anti-sexual harassment” female activists, all female human rights defenders such as Su Changlan etc. that fought hard for women’s and children’s rights, and to stop torturing all our sisters who are upholding their personal, ethnic and religious rights! 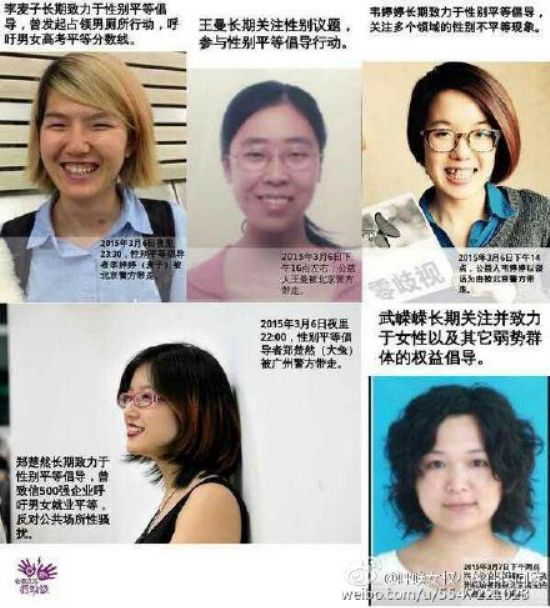 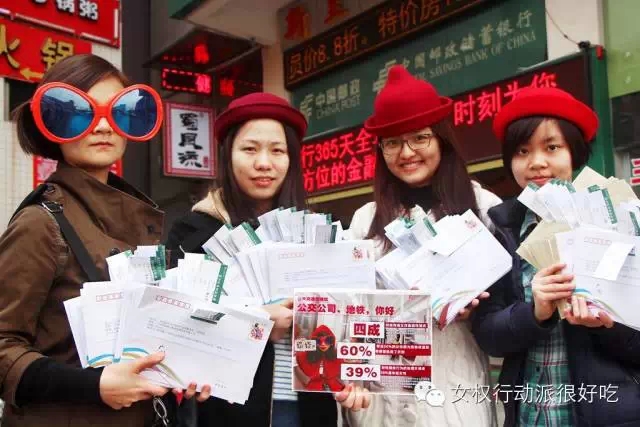