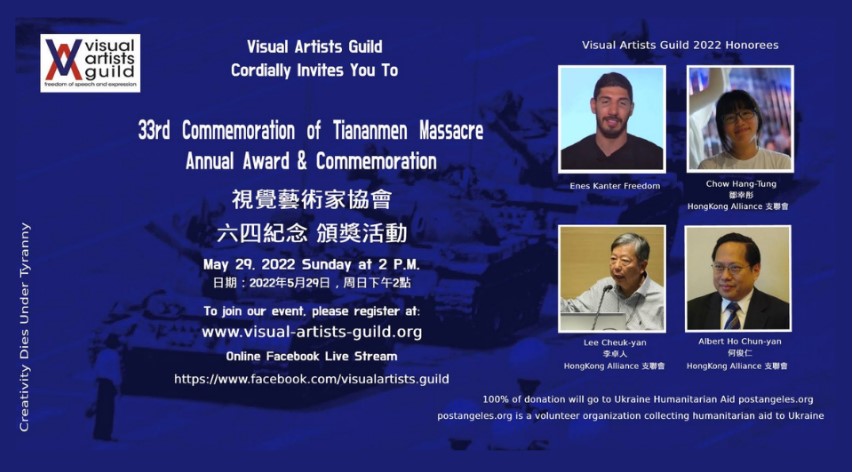 BACKGROUND INFORMATION ON THE HONOREES

Enes Kanter Freedom who is formerly with the NBA Boston Celtics, Utah Jazz, New York Knicks, Portland Trail Blazers will join us on-line to accept the award. We honor Enes Kanter Freedom for his stand on human rights issues especially during the 2022 Winter Olympics when he used his unique platform to bring international attention to the Uyghur Genocide, Tibetan freedoms and Hong Kong’s loss of civil liberties despite knowing full well the price he has to pay as in the case of former Houston Rockets manager’s tweet in support of Hong Kong’s pro-democracy protesters in 2019.

Enes had said, “I am telling all my athlete friends: All the gold medals in the world that you can win is not more important than your morals and your values and your principles.” He further urge his fellow athletes and those who have a platform, “… to stand for innocent people out there and be their voice who don’t have a voice.”
For his activism, Enes Freedom was traded to the Houston Rockets but the Rockets waived him resulting that he is no longer on any of the NBA roster.

Visual Artists Guild will also be honoring Lee Cheuk-yan, Albert Ho Chun-yan, Chow Hang-Tung, former Chairs and Vice-Chairs of the Hong Kong Alliance in Support of Patriotic Democratic Movement of China. The Hong Kong Alliance was founded in May 21, 1989, two weeks before the Tiananmen Massacre. Since the massacre, its main goal was the accountability of the massacre with the estimates of death toll vary from hundreds to thousands. Every year, the Alliance had held candlelight vigil in commemoration of the the massacre until 2020 with Beijing’s imposed National Security Law onto Hong Kong and subsequently had to disband last year.

All three of the honorees from the Alliance have been arrested, denied bail and waiting to be tried under the National Security Law.

Jing Zhang is the President of Women’s Rights in China (WRIC), a non-profit organization which aims to protect and advance the political, economic, social and cultural rights of women and children in China. The group’s volunteers have exposed cases of human trafficking in China in particular of children and girls. She will talk about the case of the Chained woman which had become the topic which 100 millions in China responded to with personal knowledge.

Samuel Chu is the President of The Campaign for Hong Kong which mission is to advocate for US and international leadership and policies that advance human rights and democracy for all Hongkongers. Samuel, an American citizen, is the first foreigner to be issued arrest warrant against him under China’s imposed National Security Law in Hong Kong.

Louisa Greve is the Director of Global Advocacy for Ughur Human Rights Project, a non-profit organization which advocates for the rights of the Uyghurs and other Turkin Muslims. She has served on the board of Amnesty International as well as on other human rights Boards and advisory committees.

We will send you a link to join our event.