Girl at 8 months pregnant: a valuable life in need of saving

On October 30, 2011, a volunteer from Anhui and I brought donations to a nunnery in the province. The money was raised by a few non-governmental organizations from the U.S.in the hopes that they could help support girls who were abandoned at nunneries. Our last stop was Gulingquan Nunnery, which only has one nun, a deeply spiritual and loving Buddhist woman, and six abandoned girls. Since 2008, we’ve been steadily giving them financial aid but since 2010 we have been able to give them regular monthly aid. There are five girls at the nunnery since the oldest one moved out, but the nun applied for only four girls’ worth of aid this year, effectively cutting off the second oldest child’s tuition stipend. Why? Is there a reason why she can’t go to school? 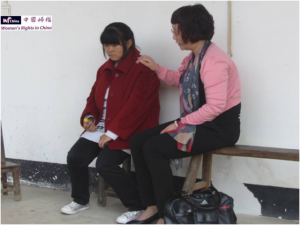 A volunteer for WRIC discovered that the second oldest girl in the nunnery, Ying Liu, was raped and 8 months pregnant. She immediately rushed to the temple to comfort and console Ying Ling and even arranged for Ying Liu to be taken care of during this stressful time. With a positive and proactive attitude, the loving volunteer gives Ying Liu a bit of courage to face her future. （photo by WRIC） 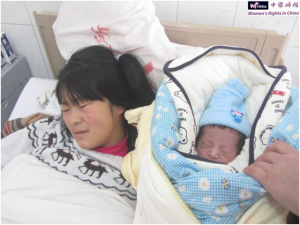 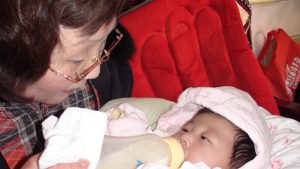 Liu Ying is miserable with her newly born baby. WRIC’s Volunteer was Feeding the new baby.（photo by WRIC） 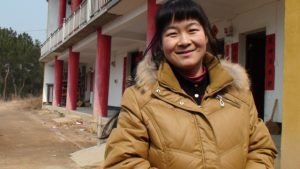 After living with the WRIC volunteer for three months, Liu Ying returns to the nun. She jokes around and laughs with her sisters. （photo by WRIC）

One morning as we were handing out donations in Anqing’s Sancheng Temple, a nun named Xinding told us that something might have happened to Ying Liu. She said that her master had hidden the child somewhere, and begged for us to go to Gulingquan to see what’s wrong. When we went to the nunnery, we had to ask numerous times before the master nun would agree to tell us about Ying Liu’s situation.

The nun said that a month ago, she noticed that Ying Liu’s belly was larger than normal and brought her to the hospital. Ying was indeed pregnant. Unwillingly at first, Ying finally revealed that a man, one of the caretakers of the temple, had raped her. When this forty year old man found out that Ying became pregnant, he disappeared without a trace. This kind of situation is incredibly taboo in Buddhist monastic culture but she couldn’t force Ying to have an abortion–that would be murder. But she also could not allow the child to live in the nunnery. Anxious, disgusted, and furious, the nun Sheng Ying sent 8-month pregnant Liu Ying to an old temple in the mountains to have the baby in secret. She did not want the news to spread. Liu Ying’s life and well-being would be in danger if the Family Planning officials found out.

We emphasized that our top priority is to take the girl to the hospital as soon as possible. It was urgent—we couldn’t let Liu Ying bear the pregnancy alone in the abandoned temple. Hiring a midwife was not a viable alternative—it is actually illegal, not to mention risky, to give birth at home.

Finally we came to an agreement. On November 1, we left from Tongcheng and drove more than an hour on mountainous roads to the abandoned temple Sheng Ying led us to the abandoned temple. We were worried that if the girl went through labor at the temple, her life would surely be over. However, Sheng Ying said that the girl cannot deliver the baby at a hospital in Tongcheng, otherwise Family planning officials could easily find her. She urged us to look for a hospital elsewhere that would be safer.

Liu Ying had neither a Birth Permit nor a marriage certificate, which meant that her pregnancy was illegal and punishable. If she ended up at a hospital surrounded by only strangers, she would be forced to have an abortion. Just recently, a 7-month pregnant woman named Jihong Ma was forced to have an abortion in Shandong because of the same legal situation. Both mother and child died. We couldn’t just stand by as the same tragedy threatened the life of a 19 year old girl. We asked for help and support from friends, family members, even mere acquaintances. Finally, a woman from Anqing responded to our prayers and introduced us to the supervisor of a center for the well-being of women and children, who agreed to help us. We were elated. We immediately drove Liu Ying to the clinic. They did a preliminary check-up of mother and child, who seemed to be healthy. However, Liu Ying was not. Due to intense psychological stress and malnutrition, she was extremely weak. The worst part was that she refused to speak during the entire process. We kept talking to her, consoling her, and asking questions, but she never said anything. The only words she would say is “Thank you.”

As of now, Liu Ying has settled in Sancheng Temple. We found an assistant (?) to look after her and assist her with day-to-day tasks. Should anything happen, the women and children’s clinic is just half an hour away. Before we left, we paid for the emergency medical expenses and the hospital stay. We also gave Liu Ying some money for maternity clothes and nutritional supplements. Touched by everybody’s compassion, her mood became more and more stable. We hope that despite everything that’s happened to this orphaned and abandoned girl, our actions might show her that the world is full of love and kindness. In the face of such pain, stress, and adversity, we pray that both mother and child can live peacefully.