From October 20 to 26,2012 WRIC volunteers visited Ding Yuan in Chu Zhou,Anhui to investigate the enforcement of the PRC’s new pledge to stop their practice of forced abortion. Ding Yuan is the hometown of Li Keqiang, who is expected to be the Premier of the State Council of the People’s Republic of China. As WRIC volunteers passed through villages in China, villagers talked of this prospective Premier with enthusiasm. Discussions about politics in China are commonplace even in the villages. However, when it comes to the implementation of China’s one child policy, local and national authorities show no humanity. In July, along with six other working priorities on their list, China’s National Population and Family Planning Commission delivered a report calling for an end to late-term induced labor (abortion). All local government officials at the conference expressed their willingness to follow the spirit of the conference. However, one Party Branch Secretary from the PRC’s Basic Level told our WRIC’s volunteers that they never heard such a speech nor regulation.In that village, since June, three women have been forcibly aborted. Apparently, there is an unequal partnership between Local and Central Government making the PRC’s Central Government, with its focus on imposing top-down solutions, unaware that what is ordered by them is not carried out locally. If steps are not defined in the government’s priority area, the program will not be carried out properly or thoroughly. For example, although the PRC Constitution guarantees freedom of speech, the PRC’s government often harasses, arrests, and imprisons those independent scholars, netizens, and artists who are critical of the state system or government’s policies. China dissident and Nobel Peace Prize winner Liu Xiaobo remains locked up. Because the PRC’s Central government endorses, acquiesces, underplays and withholds the civil responsibility of those murders, they do not take the laws seriously. The situation is worse in China’s family planning system. 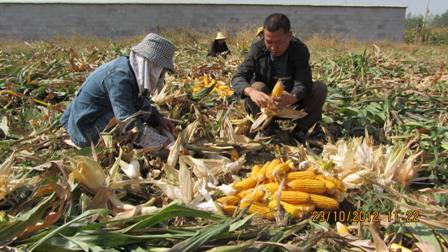 WRIC volunteer Yao Cheng  interview rural women in Anhui China October 23, 2012 . （Photo by WRIC）
New Forced Abortion Tragedy in Shandong Province
The June 2012 forced abortion cases in Ankang, Shaanxi and Changsha, Hunan brought international condemnation by the US Congress and the European Parliament of the PRC’s inhumane One-Child Policy. In July, the Chairman of the Chinese National Family Planning Committee ordered moderation of the policy’s implementation. Sensational tragedies of forced abortions had abated somewhat as a result. Instead the emphasis had transferred to heavy fines on “illegal births” which include giving birth without a permit or assigned quota. On August 2, WRIC was informed of Xu Li, a six-months pregnant woman in Wuyi, Zhejiang who was jailed and threatened with forced abortion. Ms. Xu, who was carrying her second child, daringly escaped custody before borrowing 90,000 yuan from relatives to pay part of the 150,000 yuan “Social Welfare” fine. Ms. Xu told WRIC volunteers via phone that her whole family’s entire annual income fell well short of the 60,000 yuan fine which is still outstanding. On average, “Social Welfare Fees” are 6 to 10 times the family annual income of ordinary residents.
On October 2, officials kidnapped Ms. Song, from Qiaojia Village, Heilizhai Township of Zibo City, Shandong Province who was six months pregnant. Seven Family Planning agents took Ms. Song, who was at home alone around 5pm. She was driven over hundred kilometers to Dongying City’s Boai Women’s Hospital, a private-run for-profit business for an abortion. During this ordeal, Ms. Song was stripped by PRC Family Planning officials and bound with ropes. Her cell phone was confiscated. After she was sedated, Ms. Song was finger printed on the abortion consent form to give “consent.” After the procedure she was jailed inside her hospital room. At 11pm that night, Ms. Song’s family finally found her in Boai Hospital after the abortion, lying naked in the hospital bed.
Local Government Unaware of Central Government’s Tone
Qingshan Village in Dingyuan County is remote hill-and-valley country, where communication is difficult and transportation, not easy. More than a dozen residential groups occupy this village. Residential groups range from tens of families to several dozens. Most of the younger labor force works outside of the province as migrant workers. Mr. Li, the Village Party Chairman told WRIC volunteer that five babies were born in his residential group, one girl and four boys. Most young women from the village were working in the coastal Zhejiang Province, where private ultrasound clinics proliferated. If a baby girl was detected during the pregnancy, then she would be terminated through abortion. Strict enforcement of the PRC Family Planning Policy does not allow expectant women to check into hospitals outside of their home counties. Village officials try to persuade women carrying “illegal” pregnancies to leave. If the women are found out, Township officials will arrest them to force abortions on them. The PRC Family Planning Commission actually set up a reward system. A person who informed on a woman carrying a second child could receive a 500 yuan reward. Informing on a woman carrying a third child meant a 1000 yuan reward. “Illegal” extra-quota births would cost the Village Chairman and the PRC Family Planning official 50 yuan each (out of a 500 yuan monthly salary) plus additional punishments during promotions and yearly bonuses.