In the mid-month of December, 2011, the place with the low altitude in Bijie, Guizhou was not frozen, but it was close to zero and it was considerably cold. Particularly, almost every day drizzled in winter of this year, thus the road was muddy, making people treat it as the dangerous road.

No matter how timid I was, I could not do The Rural Baby Girl Assistance Program in a “governmental matter”, so that people would mix me with the “public servant”. At 9:00 am on 20th day, I set off and left for the Haizi Street for more than 10km to grant subsidies to baby girls in this area. Here was the town with the most of assisted baby girls. Unfortunately, for deliberate nullification of the Haizi Street Local Police Station and the village secretary, as well as withdrawal of another volunteer Wei Han, after subsidies for baby girls less than one year old were cancelled month by month, only 11 baby girls at the Haizi Street has retained subsidies for baby girls.

On 20th day of each month, subsidies were granted to the Haizi Street. The old man Guoying Qiu over seventy years of age carried his great-grandson Shangjin Sun to get the subsidies. On 20th day of last month, Guoying Qiu said miserably, his granddaughter Na Peng’s psychosis attacked again. She has disappeared for nine days. He also said, Na Peng has disappeared for more than 10 days before. She was found out in a place over 10km by a person who got acquainted with her and sent her back. Before long, Na Peng lost again.

It was comforting that on December 20, I saw Guoying Qiu coming alone without carrying Shangjin Sun to get subsidies. I asked her and knew that Na Peng’s family and address were asked by the local police station at Piaojing Town, Dafang County, which was a neighboring county. The local police station policemen sent her to the native place in Bijie Haizi Street. However, Na Peng sometimes was good, but sometimes was bad. When she was good, she could look after the child. When the child cried, she would hit the child or even throw the child on the ground,making people worry about it. In this morning, her state was good, thus Guoying Qiu let her look after the child, while he get the subsidies for his great-grandson. However, Guoying Qiu had to go back quickly, because Na Peng’s disease might attack at any time. It was not safe when she look after the child.

Another thing was interesting. It happened in the Guanyin Bridge on that day. After I registered and took a photo in a pregnant woman’s home in Xianshan Group, Wuli Village, Guanyin Bridge Office, a Miao woman who carried with a child and looked familiar said to me. Her child on the back was a baby girl who was just born for four months. She asked me to register for her. I followed this woman to go to her home. I said, “There is no wonder that you look familiar. I came to your home to take a photo last month, right?”

I said, no worry in this time, right?

Therefore, I started taking a photo and registering for her child Jiamei Tao.

Last month, I registered and took a photo for Jiamei Tao. At last, when I asked Yumi Wang, the mother of the child, about her telephone, Yumi Wang’s uncle came. This man looked at me with the vigilant and suspicious vision and then told something to Yumi Wang in Miao language. I handed over a leaflet with assistance purpose and mode of Chinese rural baby girls to this man and briefly explained my purpose to register for this baby girl. Then, when I asked Yumi Wang’s telephone again, Yumi Wang hesitated and answered me she had no telephone. She just planned to tell me her telephone. It seemed that her uncle told her something, thus she changed her mind and didn’t trust me. She was unwilling to let me register for her child. Therefore, I said, “If you worry about it, never mind. I will not force you. What’ sore, if you trust me in next month or other time, I will register for you again.”

Unexpectedly, Yumi Wang looked for me to register for her child just one month later. I felt happy, because Yumi Wang could register her child as the assistance object of Chinese rural baby girls. This not only made her child get economic assistance, but also let her child feel the Christian gospel. This could intentionally or unintentionally spread trust and kindness. In the society that is lack of integrity and has numberless liars, this is exactly required by people. 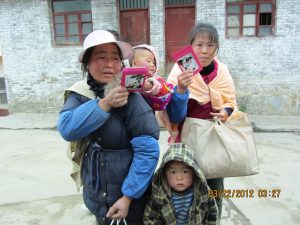 On 23rd day, since I registered baby girls for the assistance program of Chinese rural baby girls in Shuijingkou Group, Songwu Village, Zhuchang, I have met with two Christian families. The first family was the baby girl Qian Yang’s grandmother—Kongying kang, a Christian. She has been baptizing for seven years. Kongying Kang said her mother-in-law was a convinced Christian. After she got married, she was affected by her mother-in-law and believed in Christianism.

Kongying Kang’s son—Qian Yang’s father—Xiaokui Yang got acquainted with a Henan girl Yanni Zhang as working in a garment factory. They got married and gave birth to the child. After the child was just one month, they sent the child to the native place to be raised by Xiaokui Yang’s mother—Kongying Kang, while he continued doing a part-time job in Zhejiang. After Yanni Zhang got married with Xiaokui Yang, she was affected by her mother-in-law Kongying Kang, so she was also converted to Christianism. Kongying Kang and her husband’s old house was collapsed. The current house was the simple and shabby temporary structure. The indoor display was extremely simple and crude. Kongying Kang had no special thing. Every week, she got together in a place away from her home for 2km. She said, being poor was ok, because it was temporary. The God would care for her. When I told her, we would give 100RMB to her granddaughter Qian Yang every month from the next month. It was the donation from the transoceanic Christians. She said happily, this was the care from the God. Thanks for the God and thanks for transoceanic brothers and sisters!

Another Christian family was not far away from Qian Yang’s home. The registered baby girl was called as Sihan Wang. Sihan Wang’s grandmother was called as Dengzhi Yang. Sihan Yang’s parents Lin Wang and Dan Luo did some businesses in the rural market to make a living. The child was raised by Dengzhi Yang. Dengzhi Yang and her husband were engaged in agriculture to make a living. Their children went out for work and did some businesses. She helped them to look after four grandsons and granddaughters. She felt extremely laborious. At that time, I joked Dengzhi Yang as the dean in a kindergarten. Dengzhi Yang was also a Christian and has been baptizing for four years.

The country road in the Shuangyan Village was muddy and spread with pot holes. After registering two baby girls in the 13th group, I started a car and planned to return. When I backed off the car to the roadside to turn around, the vehicle slipped and couldn’t walk out of the earth. By then, a villager behind the car told me that the tire was shrunken. I got off the car. Unexpectedly, the right tire was shrunken. I had no way, but called Huanran Li to act as the assistant to pull out the jack and tire sleeve, starting to change the tire. The jack almost left the pavement, thus the vehicle slipped back. The jack was skewed and couldn’t hold the car. I hurried up to pick up a stone to plug the vehicle and then I continued using the jack. I called Huanran Li to look for a brick for insurance and then took a photo for me. When it held to sometime, the vehicle slipped back. The road was rare and slippery. In addition, there was a slope. I couldn’t do anything about it. Without my assistant Huanran Li who helped me, it was so difficult to deal with it. Several old women and middle-aged women who were waiting for me to register wanted to help me to get it done, so as to register and take photos for their baby girls.

We finally changed the tire in muddiness and cold wind and drove the car out of the slippery road section. It was almost 3 o’clock pm. Huanran Li and I haven’t had lunch, but people were waiting for us to register for their daughters and granddaughters. I said we would come after having a meal and repairing the tire, but they didn’t listen to us and asked us to register for them at this time. I had no way, but stopped the car to register and take photos.

On the way to go back to the city, the tire repair stores were busy or some of them wanted to overcharge. I didn’t repair the tire or some of them had no tire for repairing. After I went back to the city, I went to the shop that I often repaired my tires. The male’s boss was absent and only a woman stayed here. I felt relieved at her and left the tire to her, saying I would take it after repairing. Unexpectedly, I went there for three or four times. Every time, she said she repaired for five or six scars, but it couldn’t be repaired well. She said I might need to spend 600 RMB buying a new one to replace it. I thought I just used the tire for a short time, so why it couldn’t be used? I took it to another repair store. She said it only had a scar inside. I said it was left before. She just repaired a scar, and then the tire was repaired well.