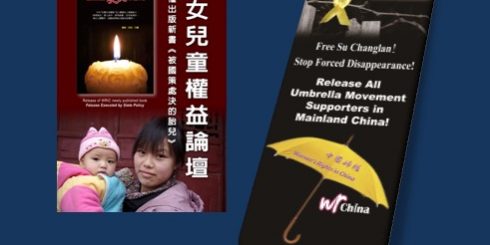 Since 1979, the Chinese government has officially and fully implemented the compulsory family-planning policy.  Until 2015, it was then announced that a couple could now began to have two children.  The state policy of family-planning within these 40 years has brought unprecedented humanitarian disasters to both the Chinese society and its people.  It has also brought devastating scourges to the survival and the development of the Chinese nation which would be difficult to eliminate.  Social problems have already been surfaced.  The gender ratio is seriously dysfunctional, the young population is insufficient numerically, the further expansion of an aging society and both the psychological and educational problems single-child are particularly worrying.  In short, the forcibly implemented family-planning policy is the most devastating disaster in human history, with the most widespread victims, the most serious damages and the longest in duration.

The WRIC  plans to utilize more than ten years of actual work conducted by the organization as the main material, using data materials from the Chinese official, non-governmental and the academics to produce a documentary about China’s state policy of family-planning.

This film will record the causes, processes and consequences of family-planning, and to analyze and reflect on the underlying causes of China’s social development from a political, historical and cultural perspective.  The WRIC believe that this film will become the most comprehensive historic documentary material regarding China’s family-planning in the past forty years.  It not only tells the horrible lessons of this policy for future generations, but it also serves as a form of comfort to the souls of few hundred millions victims of this policy. The family-planning issues involved in this film include women who were forced to abort, abandoned babies, child trafficking, the practice of nurturing daughter-in-laws from an early age and gender imbalance.  All cases studies are true.

In addition to pursuing the truthfulness, authority and profoundness of this history, the film also strives to achieve artistic excellence in this film and expects to participate in international film festivals.  At present, the film is still in its preparatory stage. We welcome you to join us with talented colleagues to provide expertise in film and television technology, data materials, volunteer assistance and financial donations in order for all of us to record this history.  History itself will also remember the achievements of all participants in this endeavor.