Sponsored by Women’s Rights in China and joined by several activism organizations, the New York Memorial for Tibetan and Han self-immolation protests was held on Dec. 11, 2012, to show the concern for those dead and wounded Tibetan and Han people for defending human rights, and to pay last respect to all who sacrificed their lives. At the opening of the memorial, all participants stood in silence to pay last respect for the dead rights defenders and to express condolences to their families. The participants urged to make the crisis of self-immolations an international issue and enjoined the new leadership of the Chinese Communist Party to squarely face the important issue, to adopt policies that defend the principles and purposes of the Charter of the United Nations and that show its respect and kindness to Tibetans and all ethnic groups. The participants also demanded that the Chinese government treat the two Nobel laureates with fairness, by freeing Liu Xiaobo and welcoming Dalai Lama. 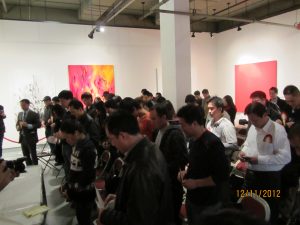 Tenzin Dolkar, USA Grassroots Director of Student Free Tibet, with Mr. Yu Yang interpreting into Chinese, said that in the past 3 years, at least 95 Tibetans died from self-immolation, including monks, nuns, peasants, young students, and mothers, representing various societal classes in Tibet. “All they request are two things: freeing Tibet and allow Dalai Lama return to his homeland.” Tenzin Dolkar indicated that during the 60 years when the CCP controls the Tibetan area, there have been basically three modes of domination, i.e., military rule, colonial policies, and fear and intimidation. She supported the claim with numbers: the CCP deploys 500,000 police in the Tibetan area, making police to Tibetan people ratio 1:6 (assuming a Tibetan population of 3,000,000). In Ngawa of Sichuan province, the heart of the wave of self-immolations of ethnic Tibetans, 3oo monks in a temple went missing after being transported away by military trucks. The local Tibetans’ collective protest against troop’s persecution of young monks also faced military suppression.

Ann Noonan, Executive Director of Committee for U.S. International Broadcasting, stated that China’s reaction to the self-immolations exposed the true face of the regime – flooding Tibetan streets with troops, arresting protester staging peaceful gatherings, and banning tourists and journalists from Tibet, knowing that their reaction in unjustified. She said, the Chinese government is held responsible for the anti-humanitarian incidents all over Tibet and must allow independent investigators and journalists to report in the Tibetan area. 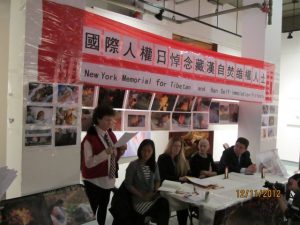 Peggy Chan, President of Visual Artists Guild of NY gave a speech on supporting Tibetan and Chinese Han who have self-immolated for sake of their basic rights.

Jeremy Taylor, Executive Director of Free Burma Alliance, said that in the past year, there were 180,000 disputes between the government and its people over land acquisition. Many Han people, like Tibetans, set themselves on fire as a means of protest; some would resort to local U.S. consulate or embassy for relief, while Tibetans don’t even have such access.

Former Tian’anmen Movement leader, Wu’erkaixi said, “What is currently absent and needed in China is conscience and wakening of conscience. Witnessing these self-immolations without any reactions from China is a proof of lack of conscience. It is indifference.”

NYS Senator Rev. Ruben Diaz also submitted his statement, which was read by the president of U.S. Visual Artists Association. He expressed his puzzlement and rage of CCP’s anti-humanitarian treatment of the Tibetan people. He once met His Holiness the Dalai Lama and understood Tibetan people’s yearning for peace while the CCP’s denigrating the image of the Dalai Lama. Due to persecution of the Chinese government, there have been more than 94 ethnic Tibetan self-immolation protests. He also mentioned three examples of non-violent protesters, Gandhi from India, Dr. Martin Luther King, Jr. during the Civil Rights Movement, and the Vietnamese Buddhist monk Thich Quang Duc who set himself on fire in 1963. He stood in Solidarity with Tibet and prayed that China’s government would defend the principles and purposes of the Charter of the United Nations and give freedom to its people.

Zhang Jing, Director of Women’s Rights in China, indicated that the self-immolation protests were the most tragic rights defending incidents among all of both Tibetan and other ethnic groups in China in recent years. This is not only a political economic problem between governments and states, but also a universal value issue of human rights. The protests were the last resort the people chose after a prolonged combat against authoritarianism and corruption. They chose to sacrifice their lives in an attempt to awaken the government and officials’ conscience, after repetitive failure of communication with them.

At closing of the meeting, about 50 participants read “Song for Human Rights Fighters” with candles in their hands, hoping to light up the darkness in China with freedom and democracy.