The Nuns and Girls In the Monastery (Part 2)

They were abandoned right after their births, just because they are girls

Twelve years ago, because of their female gender, the six children were abandoned by the door of a monastery right after their births.  They are being adopted by a sixty-plus years old nun.

Nun DongShi’s monastery is situated in Liu An City of Anhui Province. It is in an isolated mountainous area. It is surrounded by mountains, and it did not have any traffic roads before.  Offerings and visitors were rarely seen. It only had tap water and electricity a few years ago. Despite the difficult living conditions, the old nun did not abandon the babies, she did her best to take care of the babies with her soul. 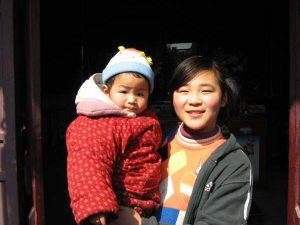 Life went on peacefully, yet, since the kind old nun passed away last year, these poor children lost their sources of livelihood suddenly. The villagers from the villages are aware of their situation, although they have pity on the children and have thoughts of adopting them, yet their living conditions simply made it impossible for them to support these children. Furthermore, these children lived with the nun since their childhood, and had formed strong bonds with the monastery and could not bear to leave the monastery. After some families of better living conditions adopted two of the children, the four children left in the monastery and their lives became much tougher. They needed to be more independent in handling their daily issues. Often, kind-hearted villagers will give them some clothing and food, however, what they can help is still limited. Life goes on, these young children overcome all odds and survived through the next few years.

The year before last, Duo Bao monastery in Liu An City adopted these four children. The nuns spent all of their monthly living expenses to send them to school. Till today, the four children have healthy bodies, and have gained much knowledge in school. The main issue now for the poor nuns is paying for the miscellaneous school fees for all children and this issue leaves them in a state of melancholy. Indeed, this is not a small amount of money. This can be illustrated as a family in the middle-income range, who earn just enough to send one child to school. But to send several children to school…its mission is impossible.

In the Chinese rural areas, due to the cultural preference for sons and the family planning policy, families who had female infants usually kill their children secretly. This saves the childbirth quota for sons. Some female infants were left floating along the river, and those who were fortunate enough were picked up by passersby. Others were abandoned by the roadside, and some will be adopted and some will be sold to traffickers. The safest bet is to place them in front of the temples or churches. , leaving them in the hands of the kind-hearted nuns.

These abandoned girls also face much of an identity crisis, which directly affects their lives. Are they considered nuns? No, they had not gone through any ritual or ceremony in order to be one. How about citizens? That’s even more inaccurate, since births are not acknowledged by both their families and the government, they are not even entitled to the most basic national identity card. Be it the fault of the parents or the government, the child is innocent, they, like many other girls, have their intelligence  and adorable appearance, naturally, they deserve the dignity that any human should have. 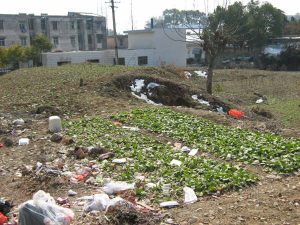 This is the farmland of a poor monastery polluted by garbage.（Source/ WRIC Yao Cheng）

The Da Bie mountainous area, situated in Liu An was once known as a red base, till today, it is still one of the biggest poverty areas in China. Firstly, because it is much isolated from other states, the villagers had a more old-fashion mindset, favoritism for sons is also stronger. There are few monasteries here, the nunneries are especially rarer.  The number of girls living in the monasteries are fewer than those in Tong Cheng, yet giving up daughters for adoption or even selling away daughters are much more common. Some girls joined the labor force at the age of 14,15. Most girls in the Southern part of China come from Huo Qiu, Mount Holyoke and Jin Zhai. Speaking about this, one would think of the poster girl for Project Hope in China, shown in the “Beautiful eyes” project, is Su Ming Juan. She came from Jinzhai County Tao Ling Zhang Wan village. With the help of good Samaritans, Su is currently out of poverty and even hold a white-collar job now. Yet, do you know something? Among the old Shan Zhai area, there are still thousands of girls under the “Da Yan Jing” project awaiting good Samaritans to help them out!