Testimony of Su Yutong Before the Congressional-Executive Commission on China (CECC), Washington, D.C. 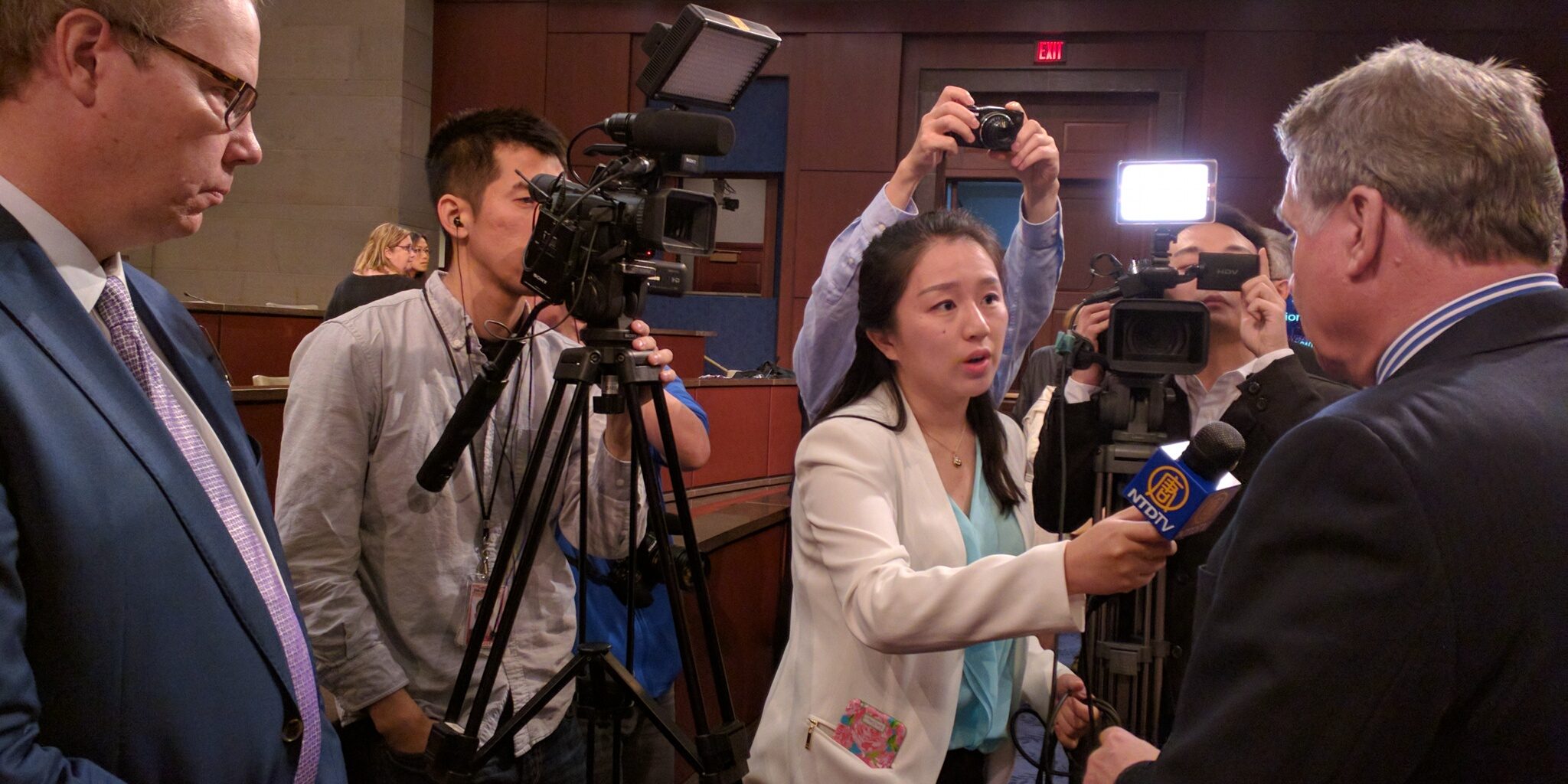 My name is Su Yutong. I am a journalist and activist based in Germany. In June, 2010, after I made public the personal diary of former Chinese Premier Li Peng, my house was ransacked by the police and I was forced to leave China. In August that year, I became a journalist with the Chinese section of Deutsche Welle where I wrote and published nearly 1,500 articles, most of which were about human rights and political affairs in China. The human rights lawyers and activists I reported included Chen Guangcheng, Ilham Tohti, Gao Zhisheng and Gao Yu. All of this work annoyed the Chinese Communist Party (CCP). Its state-owned newspaper Global Times attacked me in an article in August, 2014, for “constantly criticizing and vilifying China.” 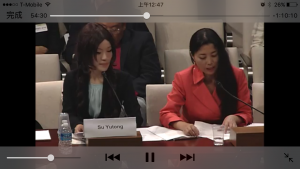 Su, Yutong (left) was at the hearing.  After the hearing,WRIC’s Jing Zhang，Ann Lau, Cheng Guangcheng, and other supporters were photographed.

Before I came to the United States to participate in this hearing, I was in contact with Chinese journalist Gao Yu and the family members of detained human rights lawyers. Gao, aged 72, had already been jailed twice. She was arrested and sentenced to prison in April, 2014, for a third time, on charges evidently fabricated by the Chinese Communist Party. The real reason for her imprisonment was retaliation for an article she published in her Deutsche Welle column “Beijing Observer” which criticized Xi Jinping. I was her executive editor at the time. Last November, after Gao Yu was released on medical parole, the University of Bonn hospital was preparing to provide comprehensive treatment for her. And the German Ambassador to China issued her a visa to Germany. But the CCP authorities prevented Gao from leaving China for her medical treatment and ordered she remain silent.

Since July 9th, 2015, the Chinese government has been conducting a sweeping crackdown on human rights lawyers and activists. The wives of several detained lawyers asked me to bring two videos to this hearing. To this day, these women have been unable to visit their husbands in custody. No one knows what abuses these incarcerated lawyers and activists have been suffering. These women are appealing again to the international community for assistance. (I would like to request to show these two video clips at the hearing.)

At this hearing today, there is not enough time to tell the stories of all the human rights activists in China.  Since Xi Jinping took power, China’s human rights conditions have worsened constantly. The most courageous and outstanding people in China today are now in prison or on the way to prison. I am hoping such a human rights disaster will receive more media coverage and more attention from the international community. But there’s one dangerous trend, that is how the CCP has reached its arms of news control overseas, as part of its “Great Overseas Propaganda Strategy.” Such strategies include cross-border censorship and infiltration, attempting to muzzle international media in their coverage of China’s worsening human rights conditions. As a journalist, I urge the Congress to pay more attention to this reality.

In 2011, Li Congjun, the head of Xinhua News Agency, described in a article in the Wall Street Journal the “new global media order”. Hundreds of Confucius Institutes proliferate around the world as an important part of China’s overseas propaganda campaign. The Chinese government has been pouring large amount of money in buying up overseas newspapers and radio networks. Benjamin Ismail , Asia Director of Reporters Without Borders (RSF) says RSF found a number of digital radio stations in Paris that had been secretly run by proxy companies operated by the Chinese government. In November, 2015, Reuters also reported that WCRW, a radio station based in Washington, D.C., has China International Radio, a Communist Party mouthpiece, as its hidden major shareholder. The radio waves of this station cover the entire Washington, D.C. region, including the Capitol Hill and the White House.

According to an investigation by Reuters, there are already 33 radio stations around that world that are affiliated with China International Radio. Numerous media outlets with the Chinese government as the controlling shareholder scatter throughout the world. And they hire local workers. At the press conferences during the annual sessions of National People’s Congress and Chinese People’s Political Consultative Conference in Beijing, CCP officials invited reporters from fake overseas media to ask pre-arranged, non-sensitive questions.

Buying off and cracking down—these are the two tactics being adopted in Hong Kong, once a paradise for books banned in China. Hong Kong publisher Yiu Mantin was sentenced to 10 years’ imprisonment in China for publishing the book “Xi Jinping, China’s Godfather.” In March, relatives of New York-based activist Wen Yunchao (also known as Bei Feng) and German-based political commentator Chang Ping were detained and interrogated in relation to an open letter calling on Xi Jinping to resign.

Under the CCP’s media control, a number of overseas and online Chinese-language media outlets have been serving as platforms to learn about a real China.  When I was young, I secretly listened to Voice of America which is was and is still banned in China. These media outlets have now become targets of the CCP’s incessant efforts at control. Chinese embassies and consulates around the world have started to play the role of the Ministry of Propaganda.

In 2013, my former employer Deutsche Welle hired Peter Limbourg as its new director. Soon after he assumed the post, Mr. Limbourg paid a visit to the Chinese division and told the staff that he had met with Shi Mingde, China’s Ambassador to Germany. Mr. Limbourg demanded that the Chinese division not always criticize the Chinese authorities and should “appropriately encourage” them instead. In 2014, Mr. Limbourg hired Frank Sieren, a German businessman who is a long-term resident of Beijing. Mr. Sieren has had numerous business cooperations with the CCP’s mouthpieces Global Times and China Central Television. In September,  2014, German newspaper Süddeutsche Zeitung reported the minutes of an April meeting between Deutsche Welle and China’s Ambassador to Germany, which clearly revealed that the Chinese Embassy demanded Deutsche Welle change.

On June 4, 2014, Frank Sieren published an article in Deutsche Welle, in German and Chinese languages, describing Tiananmen Massacre as “a slip-up by the CCP.” The piece sparked a public outcry from a number of pro-democracy activists and massacre survivors.  I was a signatory to an open letter protesting this article. I spoke up against the article on Twitter. Soon afterwards, the deputy director and the director of the Deutsche Welle Chinese division, both of whom were highly critical of Mr. Sieren’s article, were shifted to other positions. Meanwhile, I was fired by Deutsche Welle.

In late August, 2014, Mr. Limbourg traveled to Beijing to attend a Chinese-German media symposium hosted by CCP mouthpiece Global Times. At the same time, I published an open letter to him in the New York Times saying that “the voice of China” is currently attempting to use economic seduction and coercion to expand its “great overseas propaganda” campaigns around the world. My wishful thinking was that Mr. Limbourg, under the warm reception of Global Times, would not be drowned in Chinese wine and succumbed to become a tool in the CCP’s “overseas propaganda campaigns.” Much to my regret,  Mr. Limbourg met with Wang Gengnian, the head of China Radio International, in Beijing on August 28, 2014. Mr. Limbourg said that Deutsche Welle’s coverage would fit into the guidance and direction set by China. Soon afterwards, he announced a cooperative framework between Deutsche Welle and China Central Television (CCTV). In early 2015, Germany’s Bundestag took note of this cooperation program and conducted a hearing. Deutsche Welle announced that it would temporarily suspend its cooperation with CCTV.

Meanwhile, Frank Sieren continues to write a column for Deutsche Welle. In 2008, another scandal took place at Deutsche Welle, when a DW reporter named Zhang Danhong lied on a German TV program that the human rights conditions in China were excellent. She was moved to another division at DW after protests. But in early 2015, Ms. Zhang was quietly returned to the Chinese department of DW, and was given her own column. All of these changes are sending subtle signals.

The CCP has been continuously expanding its scope of censorship. On May 10th, German legislator Michael Brand told the media that he was denied entry to China because of his criticism of China’s Tibet policy. Mr. Brand, Chairman of the Committee on Human Rights and Humanitarian Aid of the German Bundestag, said the Chinese Embassy in Germany sent people to meet with him in person, demanding him delete his articles on Tibet from his official website. They also demanded Mr. Brand not to attend a meeting with a Tibetan human rights organization. Mr. Brand said such behaviors by the Chinese Communist Party are blatant and absurd, and it’s unacceptable that the CCP exports its censorship to Germany.

Mr. Brand’s stance is very clear and of great importance. We hope politicians in countries throughout the world dare to say “no” to the CCP. In recent years, as China has achieved economic progress, numerous countries choose silence and compromise on China’s human rights abuses in exchange for contracts with the Chinese government. The most notable is the U.S. President Barack Obama who has been very weak and compromising when facing China’s human rights issues. The Chinese government nowadays dares to reach its long arms to control the world, one factor is the brutal politics since Xi Jinping took power. The other reason is the appeasement from a number of countries.

As a media worker, I urge democratic countries to take notice of CCP’s propaganda campaigns overseas, and its infiltration and disturbance of the freedom of press. The United States and other countries should organize investigations into China’s infiltration of press freedom and media outlets established by the CCP; As a human rights activist, I am here to criticize and expose the increased crackdowns and persecution of human rights activists by the Chinese  Communist government, especially under Xi Jinping’s regime; I hereby request democratic governments not to neglect human rights conditions in China. Former U.S. President John F. Kennedy said his speech at West Berlin’s Schöneberg Rathaus (City Hall) in 1963: “Freedom is indivisible, and when one man is enslaved, all are not free.”

Finally, please allow me to express my gratitude to CECC’s continuous focus on China’s human rights conditions and assistance to activists all along. My special thanks go to Congressman Chris Smith and Senator Marco Rubio.