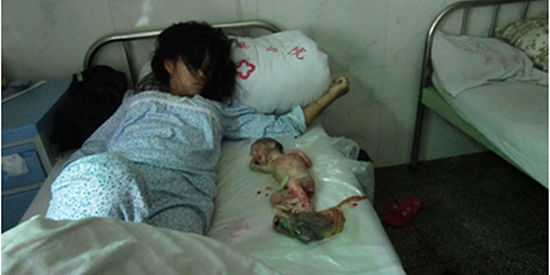 July 10, Shaanxi government have paid 70,000 yuan ($11,000) to Feng Janmei forced to have an abortion seven months into her pregnancy, according to her attorney. The lawyer said the woman appreciated the financial compensation but said nothing would make up for the forced abortion and the taking of her baby’s life.
The forced abortion sparked international outrage as the picture of Feng Jianmei and the body of her aborted baby lying next to her in a hospital bed circulated the Internet.
The state-run Xinhua news agency said the money was meant to avoid any further legal entanglements over the abortion, adding, “The signing of the agreement means neither party should raise any question related to the issue again.”.
Zhang Kai, Beijing lawyer for the woman and her husband, Deng Jiyuan, said the couple agreed to the settlement of 70,000 yuan, but that the couple faces “spiritual pain” that will endure a lifetime.
Category: Forced AbortionBy wrchinaJuly 11, 2012Leave a comment