Pan Hui is a little girl with a cleft lip.

You are here:
NewsnunneryOrphansPress release

Even with a cleft lip, this little girl named Pan Hui is still beautiful—she has a round face and soft fair skin. Yet she feels scrutinized and insecure, that her beauty is scarred and besmirched by this cleft lip.

When the sun rose on January 5, 2000, a Buddhist nun from Anqing city went to the temple to light incense. At the foot of the gates she found a newborn infant, swaddled with 1000 RMB and two pouches of powdered milk. The baby’s umbilical cord was still hanging, and upper lip split open. Since the baby was just born, the nun didn’t know what to do. She had no prior experience with infants, so she called a Buddhist believer to be the temporary guardian.

They were unable to correct the condition at a plastic surgery hospital in Anqing. Later they tried again at the Drum Tower Hospital at Nanjing,but was told that the procedure was not possible—the baby’s frontal lobe was not fully formed yet. As of now it looks like the girl will never be able to speak properly.

We want to find an American hospital that can perform this surgery. We hope that our friends in the U.S. and elsewhere might help this little girl find her beauty again.

Pan Hui ，a orphan with a cleft lip. (Photos by WRIC). 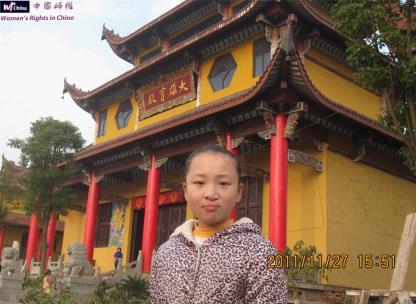