For one Chinese mother, the one child policy is a horror that must end

The story of Cao Ruyi and her family, persecuted by the government for having a second child, is told by the president of the WRIC that helped them escape and save their child from a planned forced abortion. China’s government has never stopped its family planning policy, which in 30 years has imposed with violence 275 million abortions.

China’s one child law is perhaps the worst horror of the country’s Communist regime. In 30 years, the mad family planning policy has caused 275 million abortions, most by force and coercion. In the past few years, ordinary Chinese have begun standing up and demand a change through official channels. 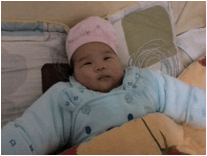 Meanwhile, associations (at home and abroad) have been set up to save mothers and children from state murder. Women’s Rights in China is one of the most active. It’s president, Jing Zhang, is a Catholic woman who survived forced labor camps and now lives in the United States. Her harsh life did not drive her away from the tragedy of the women who want to save their children from government persecution. Here is her story.

This baby (pictured) looks as adorable and lovely as all babies. However, he was in great danger while in the womb because of a man-made policy. After a long struggle and hardship, the baby has come into the world. The boy is named Li Dahai, “to reach the seas”, to express his mother Cao Ruyi and the family’s gratitude towards the concerned people overseas whose protest and aid led to his rescue. 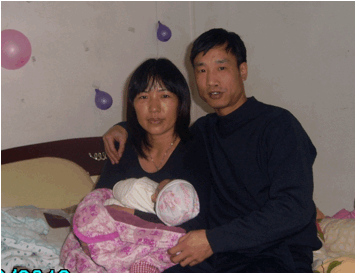 Cao Ruyi and her husband Li Pu with their new baby. (photo: WRIC)

On the morning of June 6, 2012 Family Planning Commission officials and dozens of auxiliary policemen barged into Cao Ruyi’s home in the city of Changsha. She was 38 years old and pregnant for five months without a Birth Permit from the government. Cao was arrested and brought to the Hunan Province Women and Children’s Hospital for forced abortion. Cao’s husband was also beaten while he tried to protect her.

After receiving the news, Women’s Rights in China urgently discussed how we could help. WRIC volunteers arrived in Changsha that night and got in touch with Ms. Cao through cell phone. She was able to tell me the details of the situation through long-distance phone call. Thankfully the seven or eight Family Planning agents guarding the entrance of her hospital room did not notice her talking.

On June 7, Congressman Chris Smith expressed his concern of this human rights violation. Ms. Cao later told me that a local Family Planning official threatened her, “Since you are tattling this to people abroad, I will look into the bottom of this. I have many friends in the army. We’ll deal with you in our way.”

Ms. Cao was shuttled to a nearby hotel since the hospital was full. Three rooms of the hotel were permanently reserved by the Family Planning Commission to detain “illegally” pregnant women like her who were about to undergo forced abortions. Ms. Cao was ill and traumatized, requiring frequent IV.

After the news had gone international, WRIC volunteers accompanied Cao’s husband in negotiations with government officials, who let Ms. Cao return home, but not before forcing her to sign the Forced Abortion Order, promising to terminate her pregnancy before June 16. Her family had to put up 10,000 yuan as collateral, on top of over 100,000 yuan fine to be paid in the future. Cao Ruyi was finally home on June 10 after five days’ ordeal. 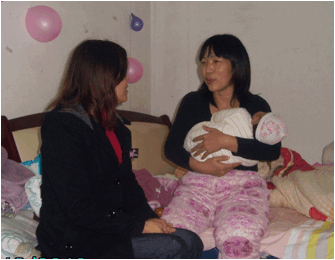 Women’s rights the volunteers visited Su Changlan and Cao wishful Saving the life of the baby was the first priority. We devised a plan for Ms. Cao’s escape. The couple changed all of their cell phone numbers immediately. Hiding far from home but relatively free of danger, they were cut off from all outside communications until Ms. Cao gave birth on October 15. In consideration of the family’s safety and health, we did not disclose the news at that time.

While the Cao Ruyi case received international attention, more cases of forced abortions continued in China. Tragedies like Zhang Ronghua kept on happening, following the deaths of women like Feng Jianmei and Pan Chunyan. Congress and the European Parliament had condemned the inhumane One Child Policy and forced abortions in China.

In October 2012 however, an American organization declared in English and Chinese that the Chinese government had ceased forced abortions. China Aid, Women’s Rights without Borders and other organizations refuted such misinformation. China’s Forced Abortion policies are continuing. WRIC volunteers continue to uncover instances of forced abortions due to the One Child Policy in our investigations in rural China.

I had organized the report Forced Abortions Persist in Rural China. On October 2, Shandong Province woman Zhang Ronghua died on the operating table while ten months pregnant. On November 5, Xiao Weiting almost lost her life in the same hospital where Cao Ruyi was kept. Public statistics released by the Chinese government admitted to more than 275 million forced abortions in the 30 years between 1980 and 2009 during the Family Planning Policy. Whatever cases we could discover could only be the tiny tip of the iceberg.

In December 2012, WRIC volunteers visited Cao Ruyi’s family again, bringing a donation of $300 from an American woman who had read her story from us. Cao Ruyi’s husband Li Pu expressed deep gratitude to the many friends abroad who aided their cause, particularly Congressman Smith and Pastor Bob Fu. Without the help, he was certain that the life of the baby could not be saved.

“At their home, to think that such a little life had arrived in the world, I had to soften my step so I wouldn’t disturb the baby’s sleep.” wrote WRIC volunteer Su Changlan after her December 8 visit to the family. While little Dahai could sleep contentedly in his mother’s embrace, the child had no citizenship, no residency registration. He would not be eligible to enroll in public schools in the future. Cao Ruyi and her husband faced astronomical fines for “illegal birth” over 100,000 yuan (US$16,000). The troubles of the fines and the child’s residency registration would continue to burden the family in their long and arduous journey.