A two-year-old girl was robbed at the doorstep

At 17:30 on June 4th, 2010, at Liyuan Village, Liyuan Town, Qinyuan County, Changzhi City, Liu Ying (Xiaodoudou), a two-year-old daughter of Liu Junmin, disappeared while playing outside her home. Her families have been publishing notice for missing person through radio, Internet and other media. But they still didn’t find her. Her grandfather got a hit and became sick. Her mother, Li Fang, washed face in tears all day. Her 15-year-old sister was so depressed that her academic performance plummeted. On January 9th, 2011, there was unexpected result when our activity of searching for lost families in northern five provinces came to Changzhi City, Shanxi Province. 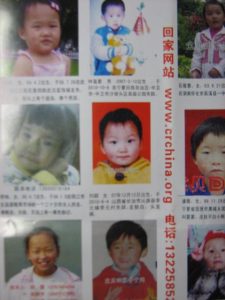 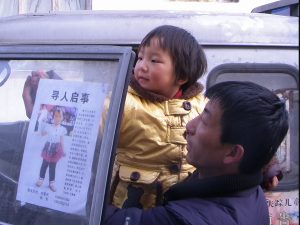 The car covered with missing children’s photos parked near the school, attracting the attention from students.

Little Bean was taking down her stuff with dad. (Photos: WRIC ) 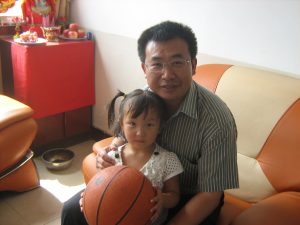 At the site of activity, there was a middle-aged man staring at the notice for Liu Ying for a long time. A volunteer found him and asked him if he knew this child. He replied that this child was in his village, but he refused to tell the details. He was worried that he would offend his villager. We explained repeatedly and promised to give him financial reward and keep it secret. Then he told the truth that the child was in a village of Huguan County.

On January 11th, the group for seeking families came to Huguan County according to information provided by the man. In the family which adopted Liu Ying, Li Fang recognized her child. After the police arrived, Li Fang cried with her daughter. Subsequently, the police arrested five criminals who abducted children, one of whom was actually an acquaintance with Li Fang. After Liu Ying was rescued, Li Fang asked human traders to make compensation and brought a criminal incidental civil action against them to local court. The Women’s Rights in China (WRIC) entrusted lawyers, Jiang Tianyong and Lin Qilei, to help Li Fang and her family to defend their rights.

In January, 2011, Liu Ying, a three-year-old girl, was found in the activity of seeking lost families organized by Huijia Net of WRIC in Shanxi. Nine human traders were arrested, and four of them were arrested by the Procuratorate of Qinyuan County, Changzhi City, Shanxi Province. Liu Junmin and Li Fang, Liu Ying’s father and mother, also brought action to the Procuratorate and the Court for civil compensation against human traders. Their causes of action were that the abduction of their child not only caused a huge mental burden, but also caused huge economic losses on them. In the process of seeking their daughter, the family spent almost all savings. They lost work and time and owed a huge amount of debt.

When the Court of Qinyuan County heard the case in July 2011, Liu Ying’s parents repeatedly submitted a request to the Court to participate in the court hearing. The Court refused them on the grounds that the public prosecution case was not related to the victim.

Because the Liu was in financial difficulties in the process of finding the child, they could only resort to local legal aid. The judicial office of Liyuan Town helped them to write a complaint and submitted it to the Procuratorate of Qinyuan Count. Then it showed no concern about it. They were so helpless that they had to turn to WRIC of NGO organization which helped them to find their child.

With the coordination and help of WRIC, lawyer Lin Qilei of Beijing Ruikai Law Firm went to Qinyuan, Shanxi on August 27th. After learning about the case, he signed a letter of attorney with Liu Ying’s parents and negotiated with the Criminal Department of the Court of Qinyuan County. This was the first time that Chinese victim employed a lawyer to take action for civil compensation against human traders. If it is successful, it could be a fatal blow to the crime of abducting and trafficking people. It would greatly inspire the confidence of victims’ families in finding children and also create a new way of anti-abduction.

A female judge in the Criminal Department of the Court of Qinyuan County received the lawyer Lin. In the process of negotiation, she said that the Court never gave the victim a precedent to participate in the hearing. The Court has made the decision that the criminal incidental civil action was not accepted. However, Lin pointed out that it was obviously procedurally illegal to not notify the victim to participate in the hearing. He emphasized that the case has been tried and it was also untenable to not accept the victim’s lawsuit. The victim did not participate in the hearing due to the court’s refusal. Finally, another person in charge of the criminal department received the complaint. He said that they would give an answer after studying the case.

Lin said that the next step was to send letters to the Changzhi Municipal Law Commission,the Changzhi Intermediate People’s Court and the Procuratorate of Qinyuan County and request higher judicial departments to intervene. We would pay close attention to this case. 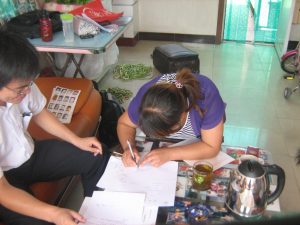 Little Bean’s Mother signs the contract of representation with the attorneys.