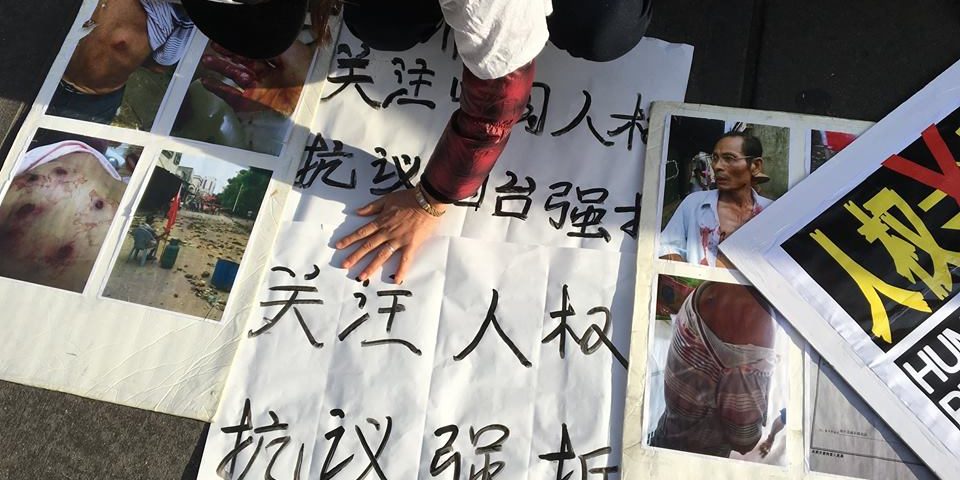 On December 13, 2016, Zhuang Liehong from Wukan Village in Guangdong, China, Yao Cheng from Women’s Rights in China (WRIC)  and a group of concerned friends gathered in front of Trump Tower on 5th Avenue and 56th Street, Manhattan to express their wishes to the elected 45th president of the U.S., Trump. They hope that he will not ignore the terrible human rights situation in China when dealing with the country. Mr Zhuang revealed that there are currently more than 40 villagers still locked up in detainment centers by the government, including his own father who is nearly 70 years old. They are all facing sentence. These 3 months, Wukan Village has been like a concentration camp: every intersection in the village has been blocked off by the police, the media from Hong Kong and around the world have been unable to enter for interviewing, and Wukan village’s internet and correspondence has been closely monitored and blocked. The news in China have not been reporting the truth. A huge number of uniformed and plain-clothes police keep patrolling non-stop, and surveillance cameras have been capturing every moment in the village. Wukan villagers live in the fear of being spied on every day. 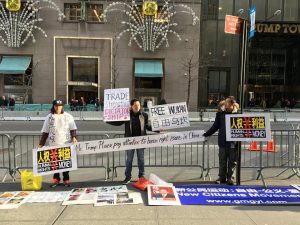 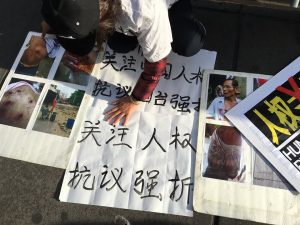 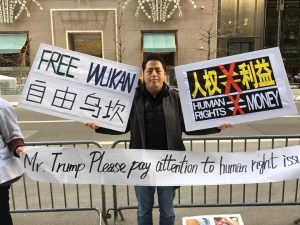 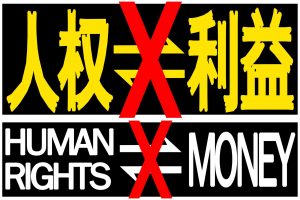 According to Yao Cheng from WRIC, the Chinese government is very wealthy but this money has been obtained by destroying the environment and taking property away from civilians: dark fog has spread within China, houses have been seized and demolished. For example, the colourful Christmas lights on the streets are mostly produced by prisoners in detainment centers and jails, as I have personally experienced.

If the U.S. conducts trade with China unconditionally, those that gain the maximum benefit are only corrupt officials and the direct victims will be the labor force in China. At the same time, the wealth that China has accumulated has brought factors of instability to the world: within less than 10 years, the weapons and equipment of the Chinese Communist Party (CCP)’s army have almost obtained comprehensive advancement and expansion, posing an enormous but hidden danger of war towards northeast Asia and South China Sea areas, threatening world peace. To maintain its autocracy, the CCP has used cruel means to suppress internal opposition. We must especially mention here that our volunteer Su Changlan has been detained for more than 2 years now for just posting a few articles in support of Hong Kong’s Occupy Central Movement. Recently, she has been threatened and physically punished by prison guards because of the issue of drinking water. With no other alternatives, she went on a hunger strike. Human rights lawyer Jiang Tianyong only went to visit the family of a detained attorney, but has been secretly kidnapped by the government and has been missing now for 20 days. Sun Zhijiang, member of the New Citizens Movement, has estimated that if the U.S. does not emphasize universal values like democracy, freedom and human rights when dealing with China, it will provide an opportunity for China to spread its autocratic ideology throughout the world.

The event lasted from 2:00-4:30. Although there was traffic control around Trump Tower, the area was crowded with the media and police, The police still cleared a space for us temporarily, and were extremely friendly. The signs for our demonstration attracted attention from the media and bystanders. They kept taking pictures and we also got continuous interviews.

Mr. Zhuang Liehong told the media and tourists that he was the only Wukan villlager that was able to escape to America. If the Chinese government doesn’t solve the problem of Wukan and even one Wukan villager remains behind bars, he will not stop condemning and advocating for him.

Mr. Yao Cheng also said that Su Changlan has multiple illnesses with her life in serious danger. WRIC calls on the United Nations, governments of different countries and people from various fields in society to express great concern and stop incidents like Cao Shunli from happening again in the CCP’s prison. At the same time, we appeal to the whole society to consider the safety of attorney Jiang Tianyong and harshly condemn the CCP for oppressing human rights lawyers.