In the street of Changzhou city, Heibei Province. 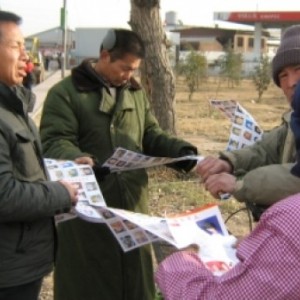 Passing out pamphlets from Heibei to Henan.

WRIC’s volunteer question natives if they saw any unfamiliar children in the area.

December 16th, 2010 was Day Two of the North China search for trafficked children. At the end of the two-day anti-child trafficking conference, WRIC sponsored the Convoy in search of Missing Children. It left the Erdi Hotel in Neihuang County, Anyang City, in Henan Province on the morning of the 16th. In the market of Xijie Village in Neihuang, the convoy held activities in search of missing children. It also distributed pamphlets at the Chuhuang Town Second High School. The aim was to disseminate information among the students and hopefully help children who were trafficked to know a source of help. Parents in the convoy who lost their child talked with the students near the school, asking for what they knew of children who were either sold into the local area or kidnapped from the vicinities.

During these discussions we got to know that in the triple-junction of Henan, Hebei and Shandong provinces situated a village called Yuan, where the buying and selling of kidnapped children was particularly rampant. The convoy reached Yuan Village. We put up posters near the local bridge. The parents distributed pamphlets to passersby while explaining their plight searching for their lost children. Many of them talked while in tears. Some of the residents were moved to inform us of specific cases of children who were sold into different villages for us to investigate. Their righteous actions gave us great encouragement. When we were about to leave, some local residents told us that in nearby Yanggu County in Shandong Province there were four trafficked children. The whole convoy arrived in Yanggu at ten o’clock at night.