People were in awe of fifth grader Naomi Wadler’s speech at Saturday’s March For Our Lives.

While there were many incredible, poised speakers at Saturday’s March For Our Lives across the country, an 11-year-old from Alexandria, Virginia, named Naomi Wadler was arguably the most inspiring.

“I represent the African-American women who are victims of gun violence, who are simply statistics instead of vibrant, beautiful girls full of potential,” the preteen said in her speech to a massive crowd in Washington, D.C. 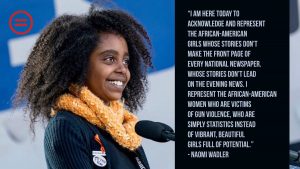 The fifth grader was chosen to speak at the march after she organized a walkout at her elementary school on March 14 to protest gun violence and honor the lives of those lost in the Marjory Stoneman Douglas shooting in Parkland, Florida. She also honored Courtlin Arrington a 17-year-old high school senior from Alabama who was shot and killed in school, just weeks after the Florida shooting.

Naomi told a local Virginia news station that she thinks “it’s completely unacceptable that we are not exercising our rights to be safe at school.” 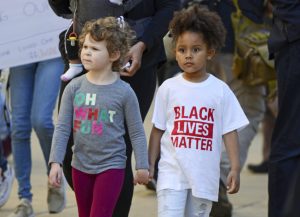 Children walk hand-in-hand as demonstrators protest the fatal shooting Sunday of an unarmed black man in Sacramento, Calif., Thursday, March 22, 2018. Hundreds of people rallied for Stephon Clark, a 22-year-old who was shot in his grandparents’ backyard. Police say they feared he had a handgun when they confronted him after reports that he had been breaking windows, but he only had a cellphone. (AP Photo/Robert Petersen)