Yingcheng, Henan resident Zhen Yumei accepted contraceptive ring implants to conform to government Birth Planning Policy in 1994. She was jailed in 2010 for house church activities. During her detention, her health deteriorated. Doctors determined the condition was caused by the contraceptive device.

Liu Seng said: My name is Liu Seng. I am a resident of Menliu village in Yincheng. My mother is Zhen Yumei. Now she has been held in Zhenzhou City female detention facility for more than half a year. Doctors advised that she has to be hospitalized for care. Her conditions now are caused by the contraceptive ring. The infection needs to be controlled and she needs to be in a hospital for observation. She has frequent headaches and nosebleeds. She also has some vaginal bleeding.

Slogans painted in the past that are still in use: 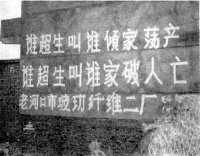 Whoever has illegal extra births will face destruction of life and family.